The spirit of the late Gram Parsons was in full effect Monday night when Emmylou Harris and Rodney Crowell hit the Belk Theater stage in Charlotte and launched into a one-two punch of Parsons' Cosmic American Music with sharp, note-for-note renditions of a pair of his classic duets with Harris, "Grievous Angel" and "Wheels." 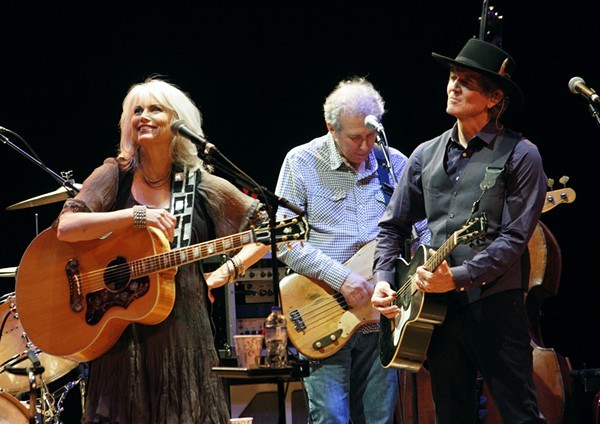 The reunion of Harris with Crowell has been a long time coming. They first teamed up in 1975, two years after Parsons died from a morphine overdose in an old hotel room in the California desert town of Joshua Tree. Harris had begun her career singing duets with Parsons on his solo debut GP, in 1973, and Grievous Angel, released posthumously the following year. Even though Harris and Parsons had recorded and toured together for less a year, his influence on her would be profound. After Crowell joined Harris' Hot Band for her country-rock debut, Pieces of the Sky, the two continued cranking out cover versions of Parsons' songs throughout the 1970s, most notably "Sin City," "Ooh Las Vegas" and "Wheels" (on Harris' Elite Hotel, in 1976), "Hickory Wind" (on Blue Kentucky Girl, in 1979) and the title song of her 1977 album Luxury Liner, which she and Crowell also performed Monday night.

In many ways, Crowell filled Parsons' shoes for Harris, writing many of the songs she would perform in subsequent years and providing the mournful male harmony vocals which had given Harris and Parsons' early collaborations so much of their power, pathos and enduring appeal. By the 1980s, Crowell began focusing on his solo career, no longer touring as part of Harris' band, though still playing on her albums. And that's what makes the current tour such a special reunion. Even though they didn't play the Buck Owens song "Together Again," which they had recorded for Elite Hotel, it was pretty satisfying to see the two together again.

During the Monday performance, the duo reprised Crowell's "Bluebird Wine," the first song they recorded together for Pieces of the Sky, playing it side-by-side with recent material including the achingly beautiful waltz "Old Yellow Moon," the title track of the duo's new album for Nonesuch Records. They threw in a nostalgic "Pancho and Lefty," the Townes Van Zandt ballad they'd recorded and performed around the time of Luxury Liner, then kicked into rousing versions of Roger Miller's honky-tonk barn-burner "Invitation to the Blues" and Kris Kristofferson's sarcastic nod to excessive living, "Chase the Feeling," both from the new album.

Some of the recent songs - like their version of Matraca Berg's wistful "Back When We Were Beautiful" - were strong statements on the process of aging gracefully if not necessarily obediently. "I hate it when they say I'm aging gracefully," Harris sang, her striking white hair as beautiful today, at 66 (her birthday was Tuesday), as her straight dark brown hippie locks were in the late 1970s. "I fight it every day."

Harris and Crowell chose a formidable opening act for this tour - the legendary British folk-rocker Richard Thompson, whose highly improvised set with his new electric blues-rock power trio shook the theater to its core. It was a hard act to follow, but Harris and Crowell managed to do so with style and grace. And when Thompson appeared on the stage with the duo for a Hall of Fame-worthy collaboration on "Ain't Living Long Like This," the title track of Crowell's 1978 solo debut, the balls-out rock 'n' roll jam belied the song's refrain. These three are going to outlive alt-country Johnny-come-latelys like Ryan Adams by a long-shot. And so is the spirit of Gram Parsons.