While it isn't a terrible idea to program as many choreographers as you can in an evening, this year's Innovative Works takes a different tack. After the opening "Gateway" by Dwight Rhoden, we get two pieces by Sasha Janes and two more by Mark Diamond. All of these pieces, performed at the Patricia McBride & Jean-Pierre Bonnefoux Center for Dance, are Charlotte premieres, and all are by choreographers that longtime North Carolina Dance Theatre subscribers will be familiar with. So we're given a series of fascinating opportunities to see how three choreographers are (or aren't) branching out, evolving, or transitioning as the troupe itself - teeming with new dancers - evolves. 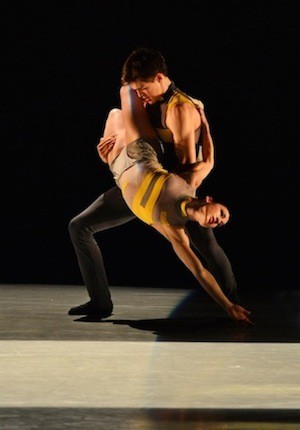 Looking at the company, I'd say that the turnover of recent seasons has brought Anna Gerberich, Sarah Hayes Watson, and Jamie Dee to the forefront as the featured female dancers while Addul Manzano, David Morse, and Frederick Leo Walker II remain their male counterparts. Each of the choreographers is a case study of his own: Rhoden's piece unfurls a new linear style, Janes is continuing to find new ways of exploring his predominating theme of romance, and Diamond is searching for something different from his previous work, toying with the abstract.

The first segment of the program was the most engrossing. Rhoden has been known to capriciously lower, suspend, and raise stage-wide scrims in the middle of his pieces, but "Gateway" is about linearity in a completely different way. It begins with two lines of dancers traversing the stage from opposite wings, with no connecting between - or within - the lines. The grey-and-yellow costumes by Aimee J. Coleman echo this horizontal linearity, and so do the dancers' moves. Ever see a stageful of dancers simulating rectangles? Yet there is excitement to the movement and the shifting musical soundtrack as the barriers between the dancers melt away.

As the title begins to imply, Janes' "Queen" thrusts us back to a medieval concept of romance, when courtliness and fealty were parts of a valorous young man's vocabulary. Replacing Naseeb Culpepper, Walker entered with an attitude that evokes the huntsman who is about to receive orders to kill Snow White. And indeed, Gerberich's demeanor as the Queen underscores the parallel. The action, set to a mysterious 17th Century piece by Heinrich Ignaz Biber, depicts a soldier quitting the service of his queen - a more perilous audience. There is ample reserve and attraction from both partners in this pas de deux to keep it smoldering from start to finish with black-widow fire.

Modern dance has often been in the thrall of contemporary, classical, and primitive styles, so Janes' exploration of chivalry actually taps a fresh vein. By comparison, Janes is turning to the tried-and-true in "At First Sight," with Watson and Morse as the protagonists in this nightclub mini-drama. Those who revere Tuck & Patti will also enjoy the experience more than I did - their repertoire was even in the air during intermission on opening night - but Janes' most audacious attempt at storytelling doesn't plow fresh ground. 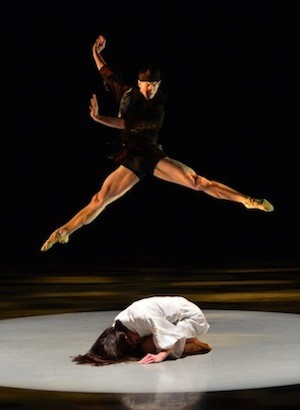 Diamond has developed far more expertise in story-driven dance over the years, and the works that haven't been plot-heavy have usually been humorous. Without the thrust of a through-line or the parry of Diamond's wit, "Zokusuru" and "Alternate Path" don't establish their individuality nearly as readily as Diamond's best. Of course, the polish of NCDT's performance never falters, with Dee particularly scintillating in "Zokusuru."