Listed below is a roundup of CL's top picks for comedy shows in Charlotte this week. Hopefully, they keep you entertained and, more importantly, laughing out loud. 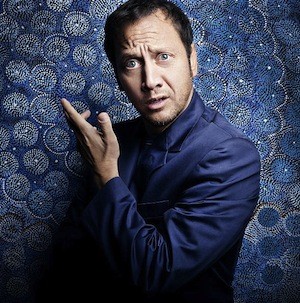 There are things about Rob Schneider that are funny and ... there are things that just aren't. A go-to for silly, goofball movie roles, Schneider has starred in his fair share of box office hits and flops alike. His latest stint on the film scene involved lending his voice to an animated South Korean film that we'll probably never watch. Still, we've got his persona as Deuce Bigalow forever etched in our minds . Folks who fancy Schneider can see him in the flesh (no, not that kind of flesh ... gross) when he comes to The Comedy Zone for five stand-up shows. $25-$30. Jan. 31, 8 p.m.; Feb. 1, 8 p.m. and 10:15 p.m.; Feb. 2, 7 p.m. and 9:30 p.m. The Comedy Zone at N.C. Music Factory, 900 N.C. Music Factory Blvd., Suite B3, Charlotte. 980-321-4702. www.cltcomedyzone.com.

Atlanta-based comedian Joe Pettis isn't bothered about being an illegitimate child - or at least it doesn't seem that way in his stand-up act. Pettis boldly shares his nonchalant opinions about not knowing who his father is and finds humor in his mom's unsure disclosure. He does so while proudly sporting a colorful sleeve of tattoos and facial hair, crucial to his rabid hipster following. You can catch Pettis and witness his wittiness when he visits the Q.C. for a one-night-only performance at Petra's. $7-$10. Sat., Feb. 2, 11 p.m. Petra's Piano Bar and Cabaret, 1919 Commonwealth Ave. 704-332-6608. www.petraspianobar.com.

John Heffron, a winner of the second season of NBC's Last Comic Standing in 2004, is proof that you don't have to be down right dirty to get a room full of people laughing. Rather than drag his mind (and yours) through the gutter, like so many comedians do these days, he relies on random situations from his life to shape his act. This can include anything from married life to aging and other random topics. Heffron performs for Laugh for the Cure at Knight Theater on Saturday. Proceeds raised from the event will benefit the Charlotte Affiliate of Susan G. Komen for the Cure. $40-$125. Feb. 2, Doors will open at 5:45 p.m. for a pre-show reception and silent auction; Show starts at 7:15 p.m. Knight Theater, 430 S. Tryon St. 704-372-1000. www.blumenthalarts.org.