I'm moving to Charlotte in March. My cousin has suggested a number of different areas that might be good options, but I was curious as to what inner city areas you know that offer the most for the least? - Teresa Spring, Columbia, S.C.

It depends on what you're looking for and what kind of amenities you like to have around. Charlotte has a lot to offer in many varying locations, so it's hard to point to just one. Here's a list of my favorites.

Wesley Heights/West Charlotte
Wesley Heights is only about five minutes west by foot past Uptown's Gateway Village. There's some amazing architecture here and views of the city skyline that can't be beat anywhere else in town. Like the other suburbs of the day that surrounded the center city core, the Heights was an experiment in presentation. Unlike its sister neighborhood Myers Park to the east, all of the original houses and streets were not planned as large and grandiose, though there clearly are some aspects that are quite impressive. The first house (and perhaps most significant) was completed in 1911 and is known as the George Pierce Wadsworth House. Much of the property in the area was owned by the same family and was developed into Wesley Heights over the next two decades, with a mixture of grand, upscale homes and modest, yet tasteful, bungalows on wide main streets and narrow side streets. During its initial heyday, the neighborhood was serviced by a trolley (some of the tracks are still present).

Today the streets are lined with beautiful mature oaks, and you can still find affordable rental and purchase properties, despite the increasing popularity of the area. Extra bonuses for Wesley Heights include close proximity to Uptown restaurants and clubs, and the West Morehead strip, which also boasts a number of other popular eateries. Although Wesley Heights is - in my opinion - the most historically significant on the west side, other neighborhoods are becoming increasingly popular with young pioneers, artists, musicians and the LGBT community: Camp Greene, Ashley Park, Enderly Park and others offer extremely affordable prices and access to the city's premier Bargain Boulevard, Freedom Drive, which includes a bevy of discount grocery, department and thrift stores. 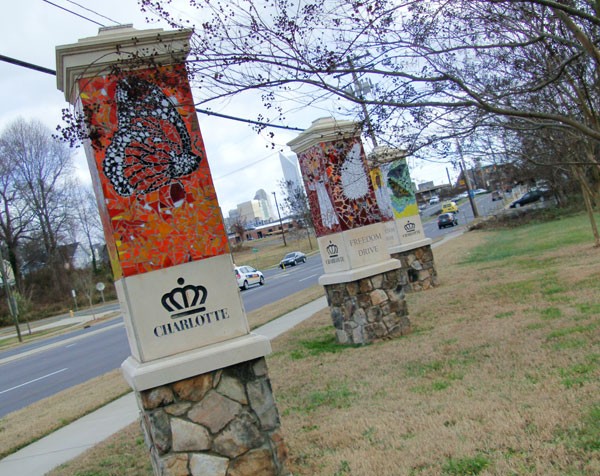 Plaza Midwood
Charlotte's Plaza Midwood neighborhood has a bit of a bohemian feel ,and it's just a few minutes east of Uptown. Originally developed in the 1920s as Chatham Estates, two leading Charlotte families were at the forefront of the concept: the Victors and the Van Landinghams. One of several "streetcar suburbs," most of the original residential spaces date from the 1920s, though the Depression and World War II halted a good deal of further construction until the 1950s, resulting in a broad mix of architectural style from Craftsman Bungalows to expansive Ranches. The area begins at Hawthorne Lane and Central Avenue and continues down Central to Briar Creek and Country Club and includes various neighborhoods on either side of Central. There's a map on the neighborhood's website that shows the specific details. Rental apartments can be very affordable, although homes for purchase lean toward the pricey end, especially if you're a first-time buyer. There's much to like about this area: It's got restaurants and clubs, antique shops, parks and a diverse community that is active in arts and music.

NoDa
The North Davidson area, or NoDa, as it was rechristened during its rebirth at the turn of the 21st century, was a thriving mill district from 1903 to 1975. In the years that followed, much of the area fell into disrepair until the mid 1980s when a couple of young artists started a movement to reclaim the district. Today, it is frequently referred to as the place to be in Charlotte for its cool quotient, music and arts scene, charming retro housing that dates back to the 1900s, and a mix of old and young residents that make it one of the most popular places to live, work and play. Former mills converted to lofts and old-style mill housing add a much needed patina to the city's otherwise glossy inner core. Residential prices can be high, but bargain fixer-uppers are still to be found.

Dilworth
Dilworth has some of the most amazing stately homes in the city. Originally conceived in 1891 by Edward Dilworth Latta as the very first streetcar suburb, the neighborhood experienced a second boom in 1911, resulting in a significant expanse full of (quite likely) the city's best examples of Victorian and Tudor Revival homes. It was considered a prime residential district until the 1960s, when, like many other historic urban neighborhoods, it began to decay from lack of upkeep and original residents heading for the 'burbs. By the 1970s, district planners, area business people and home owners banded together to refocus the Dilworth Community Development Association in an effort to revitalize the historic neighborhood. Purchase prices in Dilworth can be steep, but easily affordable rentals abound and access to the light rail, along with a mix of posh restaurants and shops, make it another good choice to live in the Queen City proper.