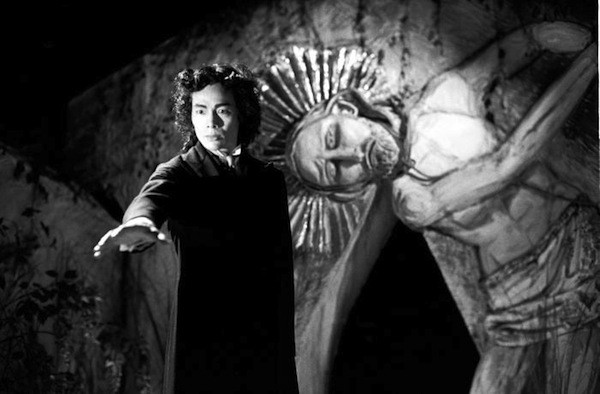 DRACULA: PAGES FROM A VIRGIN’S DAIRY (2002). Not since Francis Coppola's sharp take on Bram Stoker's Dracula has there been a vampire flick as deliriously off the wall as Guy Maddin's Dracula: Pages from a Virgin's Diary. Produced for Canadian television and featuring the Royal Winnipeg Ballet, this film brings the dance form alive on screen, at once making it sexy, stylish and relevant. Yet this isn't merely a filmed stage performance — most of the time, the dancing is so minimal that you forget you're even watching a ballet. Instead, Maddin has integrated a new reading of the text with an old-fashioned shooting style straight out of the silent era. Influenced by the 1922 classic Nosferatu, this version employs black-and-white film stock (with the occasional striking burst of color), simple title cards and often overripe performances to convey the cinematic experience of a century ago. Yet where Maddin (working from Mark Godden's stage show Dracula) ventures out on his own is in his casting of Zhang Wei-Qiang as Dracula — conveying the fear the Western world often exhibits toward immigrants from the East — and in his portrayal of the so-called good guys as humorless puritans straight out of Arthur Miller's The Crucible. The rigidity of Dr. Van Helsing (David Moroni) is far more disturbing than the sensuality of Dracula and his brides, and it's no coincidence that the dancers are most alive after they've been involved in a little neck-nibbling.