Halloween Countdown: Spider Baby or, The Maddest Story Ever Told 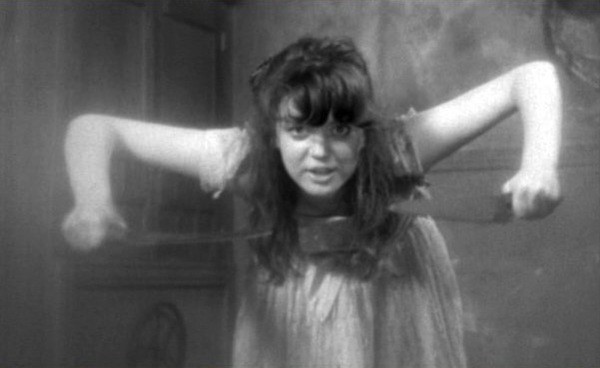 SPIDER BABY OR, THE MADDEST STORY EVER TOLD (1964). It's easy to see why cultists have a soft spot for this ragged, low-budget effort from the 1960s. Also making the rounds under the more gruesome (and less accurate) titles Attack of the Liver Eaters and Cannibal Orgy, this black-and-white curio — filmed in 1964 but released in 1968 due to monetary and distribution woes — possesses a quirky sense of humor as it relates the story of the Merrye family, two sisters (Jill Banner and Beverly Washburn) and one brother (Sid Haig, later Captain Spaulding in Rob Zombie's House of 1000 Corpses and The Devil's Rejects) who all suffer from a peculiar form of mental illness. Only Bruno (Lon Chaney Jr.), the family chauffeur, can keep them in line, but when distant relatives arrive at their dilapidated mansion with the intent of collecting an inheritance, even he can't stop the siblings' murderous antics. Chaney's career had long since disintegrated at this late stage (he would pass away in 1973), but here he delivers a fine performance in a sympathetic role. As an added bonus, he even warbles the opening theme song, with lyrics like "Cannibal spiders creep and crawl/ Boys and ghouls having a ball/ Frankenstein, Dracula and even the Mummy/ Are sure to end up in someone's tummy." Lennon-McCartney it ain't, but it sets the proper schizophrenic tone for this one-of-a-kind oddity.