New talk about the future of Carolina Theatre

It’s often easy to brush renovations to certain spaces and sites under the table when money is involved and necessity is low. That’s what happened to Charlotte’s historic Carolina Theatre — an Uptown landmark that opened in 1927 and hosted renowned acts like Elvis Presley, Frank Sinatra, Guy Lombardo, Andy Griffith, Ethyl Barrymore and Tom Mix, among others, until its close in 1978 — for the past ... uh ... 34 years (yeah, we did the math). 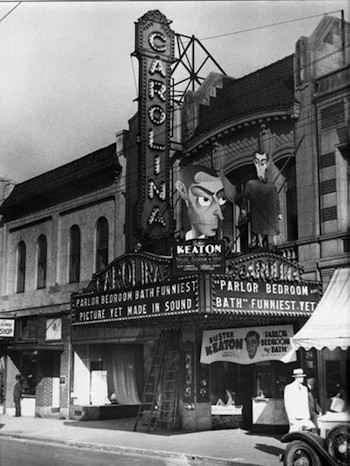 In the process, the Q.C. has flourished with newer, high tech facilities, leaving the somewhat forgotten space at 230 N. Tryon St. to collect dust. But that’s all changing now that interest in the property’s renovation is growing. According to the Charlotte Observer, Carolina Theatre will eventually be reopening. City Council is currently examining key conditions pertaining to how interested developers would complete the theater’s restorations.

That the Carolina Theatre will reopen is now a sure thing. The city’s Economic Development Committee may decide as early as mid November which of the two options is best, but a City Council vote on that recommendation might not come until January, due to the holidays.

Among the key points still to be settled: A clear definition and standards of what the city considers a “proper” renovation of the theater. That’s necessary, officials say, so there will be no debate over unmet expectations. Neither of the redevelopment plans promises to do a textbook historic restoration, because of the tremendous expense involved.

Foundation for the Carolinas wants to renovate the theater for civic meetings and put an office building in front for a mix of nonprofits and private companies. CMP Carolina Theatre LLC, which had a purchase agreement on the site between 2006 and 2011, says it will renovate the theater for public entertainment and put a building in front with commercial customers in mind.

City staff say it’s possible for either of the developers to re-create something close to the original appearance by using less expensive material now on the market. Council member Patsy Kinsey believes the developer with the best renovation plan will get the council’s support. This includes taking the pieces of the old facade and putting them back in place.