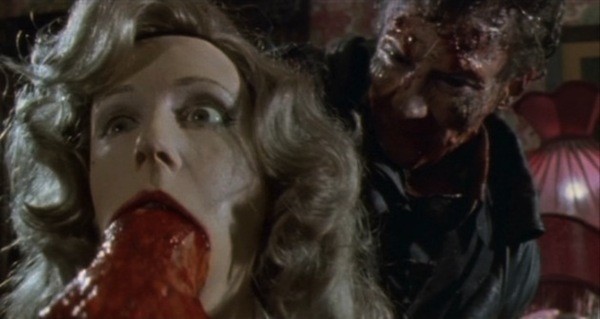 DEAD ALIVE (1992). Several years before he endeared himself to fanboys and Oscar voters alike with his Lord of the Rings adaptations, Peter Jackson was the guiding force behind a handful of idiosyncratic features in his native New Zealand. One such effort was Dead Alive, a film so excessively gory that it makes the De Palma-Pacino version of Scarface look like a vintage episode of Reading Rainbow by comparison. Yet those who can accept the gruesomeness with tongue firmly embedded in bloody cheek will enjoy a film that's clearly influenced by Sam Raimi's The Evil Dead in its ability to gleefully mix slapstick humor with demented special effects. Set in a small New Zealand town, this finds the meek Lionel (Timothy Balme) caught in a tough spot after his domineering mother (Elizabeth Moody) gets bitten by a hideous Sumatran rat monkey and eventually turns into a festering, decomposing zombie. Lionel must care for the undead population quickly building in his basement even as he hopes to romance the sweet Paquita (Diana Penalver), but matters take a turn for the worse when his obnoxious Uncle Les (Ian Watkin) decides to throw a house party. The effects by Richard Taylor (who would go on to win five Oscars working under Jackson) are often outrageous — dig that creepy zombie baby! — and the sweetness of the relationship between Lionel and Paquita manages to be effective even in the midst of all the mayhem. Look for Forrest J Ackerman, the late, great editor of Famous Monsters of Filmland, as the zoo patron reading a magazine (Famous Monsters, natch).