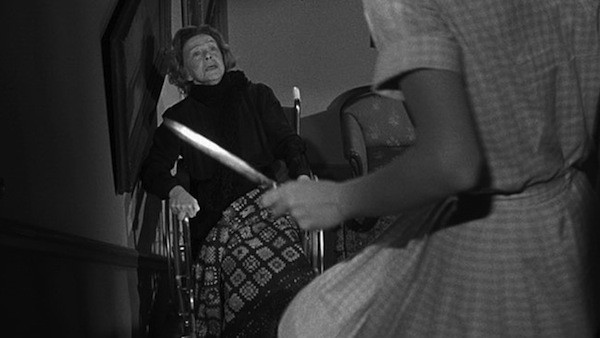 HOMICIDAL (1961). Producer, director and consummate showman William Castle clearly was influenced by (and often mimicked) Alfred Hitchcock, and Homicidal is such a blatant rip-off of 1960's Psycho that a lawsuit probably wouldn't have been without merit. Yet while traveling along similar lines, Castle and scripter Robb White manage to include enough originality that the shock ending still has the power to catch many viewers off guard. Unlike Psycho, this film's central blonde (played by Joan Marshall) is villain rather than victim, yet there's still a squeaky-clean heroine, her dullard boyfriend, a crotchety old woman in a wheelchair, and a soft-spoken young man. To reveal more would be criminal.