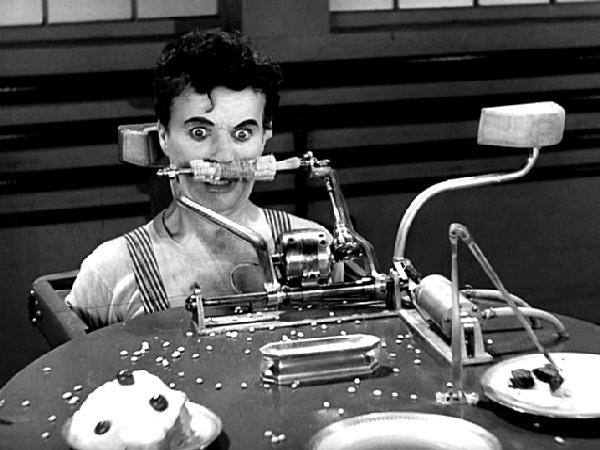 The American Film Institute named Some Like It Hot as the best comedy of all time; the IMDb voters currently have Forrest Gump ranked as the best comedy; Rotten Tomatoes' critical mass holds Dr. Strangelove or: How I Learned to Stop Worrying and Love the Bomb as the pinnacle of comedic perfection; four different British media outlets designated Monty Python's Life of Brian as best of the best; and this nation's frat boys would doubtless consider The Hangover the greatest comedy ever made. My pick? It has long been Charlie Chaplin's Modern Times, although folks who cite either Chaplin's City Lights or The Gold Rush can certainly defend their choice.

Chaplin's works were always a blend of inspired comedy, unforced poignancy and sharp social commentary, and these elements were arguably best combined in this riotous satire in which Chaplin's Little Tramp — the last time he would ever play this beloved character — has trouble finding, and then retaining, employment. Hunger, homelessness and the uncaring attitude of the American workplace all figure in the proceedings, making Modern Times as topical today as when it was first released.

Yet for all its heavy subjects, this is a comedy first and foremost, and as such, it features some of Chaplin's most brilliant — and most hilarious — set pieces. The various factory (at the beginning) and restaurant (at the end) sequences are deservedly legendary, although I always laugh the hardest during the wonderfully staged skating segment.

(A 35mm presentation of Modern Times will be held at 7:30 p.m. tonight, Sept. 24, at EpiCentre Theatres, 210 E. Trade St. The screening is free for Charlotte Film Society members as part of the organization's 30th Anniversary celebration. Those who are not CFS members can sign up for membership at the event and receive two more free screenings this week — Akira Kurosawa's Throne of Blood Tuesday and Abbas Kiarostami's Taste of Cherry Wednesday — as well as other CFS benefits.)