Best known for his comedy roles and prop designs, Peter Smeal directs Sevan Kaloustian Greene’s Narrow Daylight as the nuVoices for a nuGeneration festival of new plays moves into its second evening of staged readings at Actor’s Theatre. We spoke with Smeal about the festival and the script. 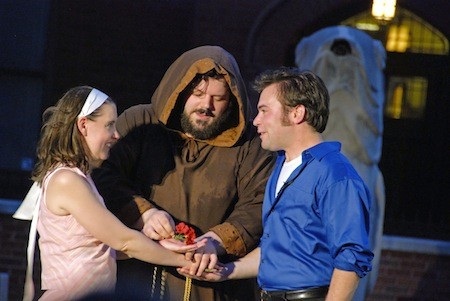 Perry Tannenbaum: Narrow Daylight is probably a little bit out of the ordinary for you in a couple of respects. You haven’t done a reading stage festival, and you don’t usually veer outside of comedy.
Peter Smeal: Well, there is comedy in this one. The playwright, if I remember correctly, has done stand-up and sketch comedy before. One of his first writing projects was like a six-minute sketch for a friend’s troupe. But this is primarily a drama, and I’ve worked in that vein before, but I’ve not directed drama before. I get cast in comedy a lot.

Was there a general audition that all four directors attended, or were there individual auditions?
We had a general audition, where yes, we were all in the room at the same time. They brought people through, cattle call style, and then you made a selection. Everyone was given a headshot for each person, and if you wanted to see them again for a callback, you stuck it in a folder. Then we kind of fought it out for the people we wanted. Fortunately, it worked out fairly well for most of us. There were lots of folks to choose from for most of the roles.

So give me a rundown of the characters in Narrow Daylight.
The play sets in Panama City, Florida, which is a city sort of known to the playwright. He’s a really interesting guy. I’m very excited to kind of get to know him. It involves a woman named Susan. She’s recently grieving over the loss of her son, who was a soldier in Iraq. It’s set in 2004 during the second of the big surges. So she just recently lost her son and had only shortly before lost her husband, and she’s being consoled by her best friend and neighbor and her daughter Anne-Marie, who’s soon to be off to college.

When they’re in the middle of dealing with all of this, a young 19-year-old Iraqi girl shows up at her door with a letter saying that she had married her son only shortly before he was killed. She has come to live with her, so there are clashes of emotion, dealing with the grief, and a cultural clash. It’s a twisted dramatic odd couple getting to know each other, the relationship mostly between the mother and Lena.

And the son is actually in the play as a lingering memory throughout the house, participating when there are flashbacks that involve the development of his and the young girl’s relationship. Lena is her name, and Nathan is the son.

There aren’t too many Iraqi actresses in Charlotte. Iraqi actors in Charlotte are thin on the ground. Fortunately, we have the benefit of this being a reading, a staged reading. So I was less concerned with the look of the people coming through and where they fit as far as hair color or looking like family or any of that kind of stuff and more for the quality of their voices and their ability to connect with the material. So we lucked out. We have Allison Lamb Tansor.

We’ve got Nicia Carla, who’s playing the best friend, and then Megan Santiago is our Lena — I could see it in her monologues that she would read Lena very well, and when we got her back into the callbacks, she tore it up completely. And then we found a Nathan who ended up just by chance having really great chemistry with her almost immediately. I know George Pond — I know his name from some of the stuff that he’s done with Chris O’Neill’s company in South Carolina. Then everything else just sort of fell into place. Julia Rae Benfield is Ann Marie, who is Gloria’s daughter. So I feel really confident that they’re going to do a great job.

So give me your pitch for why you think this Narrow Daylight might be the winner.
Oh, gee. Well, number one, it’s absolutely topical, even with the troop drawdown. The themes and the ideas and the problems that are explored are still completely topical, not just talking about Afghanistan and other places around the world where we’re engaged in conflict. That’s really a sort of frame for the story of Susan, in shock from the loss of a loved one and damaged by that, and Lena, who is equally shocked and damaged but also in a strange new place.

It’s a good story, and it’s well told. There aren’t a lot of unnecessary flourishes in it. It’s very much focused on who these people are and how they are dealing with just getting through the day. I don’t want to give the impression that it’s just a dire, downbeat thing. It’s not.

It’s still a work-in-progress, but when I was first talking to him about his past work, I could tell, even before he told me, that he had been an actor, which is not uncommon for playwrights. Because the play is filled with these wonderful little meaty moments that actors just love to get their hands on and play around with, these really nice little scenes between the characters, little arguments and great monologues where glasses get smashed that people really like to go at with gusto.