Watch out, Spoleto — Ailey Dance is on fire

Queen City dance fanatics have seen Alvin Ailey American Dance Theater rather frequently in recent years — twice now at Knight Theatre since it opened in 2010, with prior visits to Belk Theater in 2006 and 2008. Down in Charleston, Spoleto Festival USA has nearly kept pace with us, hosting Ailey in 2004 and 2009, capping the company's 50th anniversary tour. On opening night this Friday at Spoleto 2012, Ailey returns for a three-performance run through Sunday. 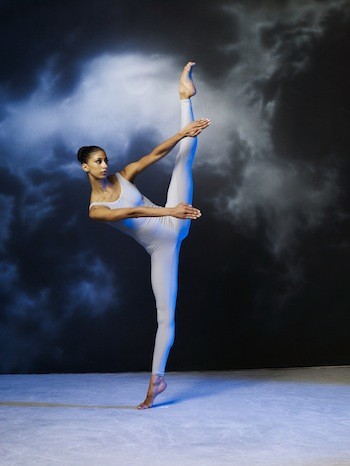 Well, something dramatic has happened since Ailey last visited the Carolinas. The regal artistic director who guided Ailey to dizzying heights, Judith Jamison, has retired — or faded into the background as director emerita. There's a new sheriff in town, Robert Battle, and he's leading the troupe into new frontiers.

Battle's most radical departure was Ohad Naharin's "Minus 16." Spoleto sophisticates will remember seeing this pithy little choreography, set to the traditional "Echad Mi Yode'a" chant for the Passover seder, when the Batsheva Dance Company performed at Gailliard Auditorium in 2007. With the Middle East in typical turmoil, the piece struck me as "regimented hysteria."

Not now. In the current Ailey version, restaged by Danielle Agami, the fearsome seder segment — with the same terrorist victim dying at the end of each stanza — is embedded in an act-long suite that includes "Over the Rainbow," Dean Martin's "Sway," a "Hooray for Hollywood" cha-cha, and a Chopin waltz in its soundtrack.

It began innocuously enough during intermission, when one of the dancers strode to the front of the stage and stood there silently, coolly surveying the audience, as if guarding the stage from intruders. Then he gradually broke into dance, first in place where he stood, and finally using the entire stage to express himself. By the time the audience had reassembled, other dancers had joined the soloist onstage in a dance free-for-all that coalesced into the "Echad Mi Yode'a" ritual.

Afterwards, a cluster of dancers strode to the front of the stage, with a softly mimed menacing look that suggested bodyguards portrayed by Blue Man Group. Before we knew it, the dancers were out in the orchestra, plucking up audience members to be their partners, and the stage was turned into a festive block party. Fun!
So Spoleto patrons may wish to stay in their seats at Gailliard during the intermission that precedes "Minus 16." Breaking the fourth wall is no longer taboo at Ailey.

Of course, Ailey fans will have multitudinous reasons to stay in Charleston through the 17 days of Spoleto, ending on June 10. This year's dance card includes a return visit of Cedar Lake Contemporary Ballet (June 1-2), The Radio Show by Abraham.in.Motion (June 1-4), and A Crack in Everything by Zoe | Juniper (June 6-10).

Theatre fare also delivers diversity, including the Charlotte-born Traces during the final week (June 6-10). I've seen that punkish circus twice, so I'll be directing my attentions to 1927's The Animals and Children Took to the Streets (May 25-June 3), Circle of Eleven's Leo (May 24-29), and the Gate Theatre's revival of Noel Coward's Hay Fever (May 24-June 10). There's a spot more interest in the solo performance artists this year after scandal struck Mike Daisey and his Agony and Ecstasy of Steve Jobs (May 31-June 5). Previous fabrications will be purged from the Spoleto version. Ironically, NPR/This American Life stablemate Jack Hitt will be performing a piece with an inopportunely-timed title, Making Up the Truth (May 25-28).

Most of the excitement in the classical music realm is directed toward the operatic productions, including two American premiers this weekend. First there's Philip Glass's Kepler (May 26-June 2), delving into the mind of the great astronomer-mathematician, and then Guo Wenjing's Feng Yi Ting or Phoenix Pavilion (May 27-June 7).

Of course, with a slate of 140+ Spoleto events, there are numerous choral, orchestral, chamber music, modern music, and interview series to look in on. Plus there's something called Piccolo Spoleto, where an additional 700+ events are scheduled. Among those are Charlotte's own On Q Productions and their Miles & Coltrane: Blue (.) at the Footlight Theatre (May 27-June 5).