Protesters speak out against 'extraordinary events'

A coalition of activist groups held a press conference in front of the Duke Energy headquarters on Wednesday morning to protest City Manager Curt Walton's decision to call the upcoming Duke and Bank of America shareholders' meetings "extraordinary events." 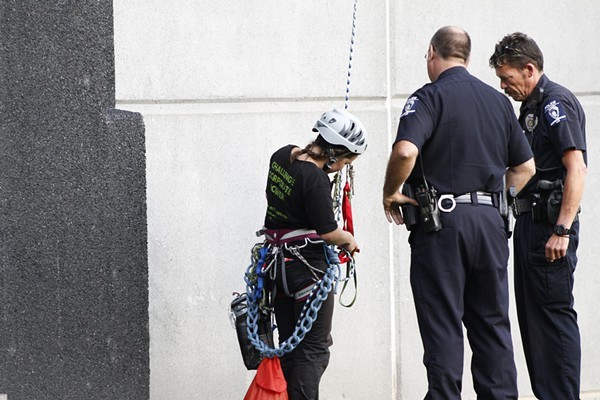 The label tightens restrictions on what protestors are allowed to do at such events and gives police more power to search people's property, such as backpacks or coolers, in the vicinity. It also bands certain items, such as scarves, from the vicinity and makes some items such as markers, hammers and spray paint grounds for arrest.

Twelve members of groups including the Rainforest Action Network, Action NC, Greenpeace and the NC Coalition against Corporate Power, among others, congregated in front of a banner that read "Duke Energy/ Quit Coal Quit Nukes/ Clean, Safe Energy Now" and spoke mostly to news cameras and reporters. 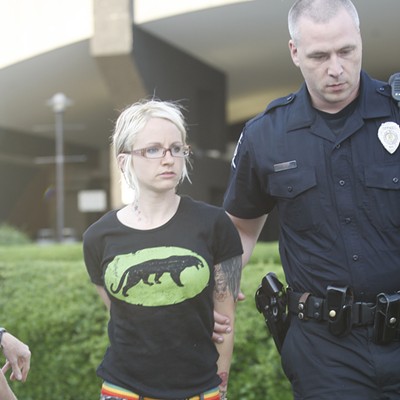 Hours earlier, members of Rainforest Action Network scaled the side of the Bank of America Stadium with climbing equipment and hung a 70-foot by 25-foot banner that read "Bank of Coal Stadium."

Activists plan to protest against what they call "unjustified rate hikes" from Duke Energy and Bank of America's reliance on coal at the upcoming shareholder meetings, they said.

The Duke Energy shareholder's meeting will take place on Thursday. Six activists from Greenpeace were arrested in front of the Duke Energy headquarters in February during a protest that Walton cited in his decision to give Thursday's meeting the "extraordinary event" tag.

The Bank of America shareholder's meeting will take place on Wednesday, May 9 in their uptown offices. Protestors plan to show up on both days, regardless of the newly passed laws.

"We will not be intimidated by these restrictions on our rights," said Todd Zimmer, an organizer for RAN who helped document the hanging of the banner earlier in the morning.

UNC Charlotte student Elisa Benitez expressed her frustrations over the extraordinary events designation at the rally.

"Why have these meetings been called extraordinary events, when all of our events are peaceful? Police should be protecting us instead of protecting them."