Meet Karen Handel, the new face for the Susan G. Komen for the Cure Foundation.

Handel is a failed politician, a right-wing extremist who lost her 2010 bid to become governor of Georgia while running on a campaign that blasted abortion rights and gay rights and took particular aim at Planned Parenthood (she was endorsed by both Sarah Palin and Jan Brewer; egad!). So did she then fade away in deserved irrelevancy? Of course not. In modern America, disgraced parties always seem to rise Phoenix-like from the ashes — heck, even the vile G. Gordon Liddy snagged his own radio show — so it's really no surprise that last year a major organization picked her as its new vice president. What's shocking is that the group was Susan G. Komen for the Cure Foundation, an organization that enjoyed a long relationship with Planned Parenthood as both fought for the rights and health of women. 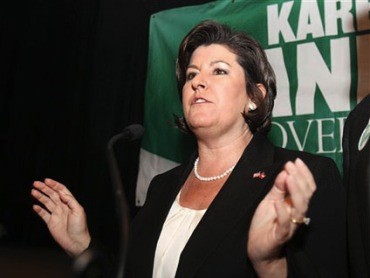 Well, no more. As of yesterday, SGK has decided to cut all ties to Planned Parenthood, announcing that it will no longer fund grants for breast exams. This maneuver, which hurts all women but most particularly poor ones (a favorite target of GOP politicians), was spearheaded by Rep. Cliff Stearns (R-Fla.), but Handel's fingerprints are also clearly all over this thing.

This isn't the first time that SGK has stirred controversy. Some of its partnerships have raised eyebrows, specifically those with companies known for offering unhealthy products (Kentucky Fried Chicken, for one). Many have criticized its marketing hooks, such as the frivolous and, let's face it, sexist "Save the Ta-Tas" and "Save Second Base" campaigns (click here for a great essay about this). Even Creative Loafing had the wisdom to previously question this group, in a cover story from 2003.

Cecile Richards, president of Planned Parenthood Federation, tried to schedule a meeting with SGK officials before all this came to pass, but she was given the cold shoulder, with the outfit not even bothering to respond to her requests. In a statement e-mailed to its members, Richards wrote:

It's a deeply disappointing decision — made even more alarming because politically motivated groups and individuals determined to undermine women's access to care appear to have successfully intimidated the Susan G. Komen for the Cure Foundation to withdraw this critical support. Over the past five years, Komen funds have enabled Planned Parenthood health centers to provide nearly 170,000 clinical breast exams and referrals for more than 6,400 mammograms. These cancer detection and prevention programs saved the lives of women who often had nowhere else to turn for care.

We know our opponents put their ideology over women's health and lives. What we never expected is that an ally like the Komen Foundation would choose to listen to them.

(Read the whole e-mail via one woman's blog here.)

As expected, while many misogynist men and subservient women are applauding this decision, more enlightened sorts are not. There's been a huge outcry against the politically motivated act, and you can get involved.

To make a donation to Planned Parenthood, go here

To voice your displeasure to SGK's corporate sponsors, go to this Facebook post for a list of all the companies. (SGK took down the sponsor page on their own website — cowards! — but someone wisely copied it before it was gone.)

To send a pre-written letter to SKG (courtesy of Daily Kos), go here.

To sign a petition (courtesy of change.org), go here. 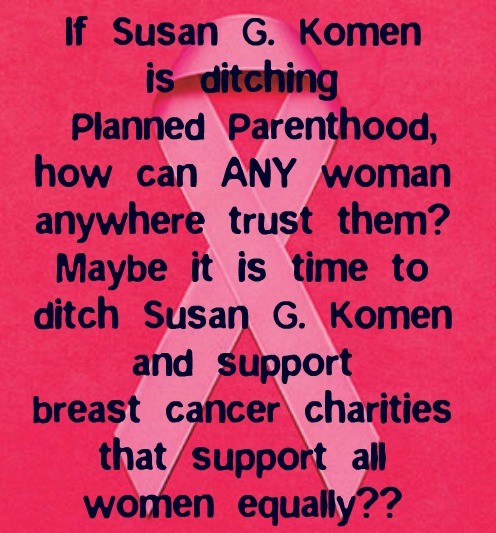