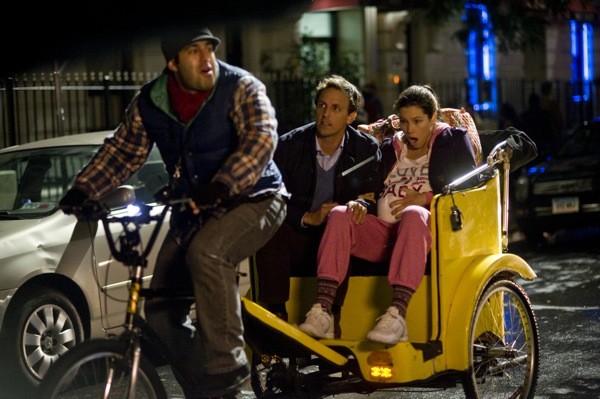 Forget counting down from 10 as the ball drops in Times Square; here instead is a countdown of the 10 key points in New Year’s Eve, which proves to be even tougher to take than director Garry Marshall’s previous all-star holiday romp, Valentine’s Day.

10. A cocky messenger boy (Zac Efron) helps a depressed woman (Michelle Pfeiffer) fulfill her New Year’s resolutions. Although it squanders any intriguing potential for a May-December romance, this is the best episode primarily thanks to Pfeiffer, the only person in this entire film investing any genuine emotion into her character.

9. The woman (Hilary Swank) tasked with making sure the Times Square ball drops properly calls upon a veteran technician (Hector Elizondo) to fix the orb when it breaks down mere hours before midnight. Swank and Chris “Ludacris” Bridges (as a friendly cop) are as appealing as always, and Marshall regular Elizondo contributes a couple of chuckles, but this vignette is especially devoid of drama.

8. A man (Josh Duhamel) who has a one-year-anniversary date with one of the other characters — they met last New Year’s Eve — is afraid he won’t make the reunion since he’s stuck out in the boondocks (Larry Miller makes a welcome appearance as a tow truck driver). I won’t reveal the identity of Duhamel’s mystery date, but let’s just say I was disappointed it wasn’t Elizondo’s character — that at least would get a rise out of the Middle America mentalities that this sort of pandering nonsense targets.

7. A harried mother (Sarah Jessica Parker) won’t let her 15-year-old daughter (Abigail Breslin, now old enough to play a character who packs on the makeup) hang out in Times Square for fear that something horrible might happen to her. Like appearing in this film?

3. Two pregnant women (Jessica Biel and Sarah Paulson) and their husbands (Seth Meyers and Til Schweiger) compete to win the sizable cash prize given by a local hospital to the couple who produces the first baby of the new year. This is the most godawful of all the segments, and not just because someone yells out, “May the best vajayjay win!”

2. As the film closes with a final shot of Times Square, one billboard on the street ends up filling at least half the theater screen. It’s the poster for Sherlock Holmes: A Game of Shadows, Warner Bros.’ other year-end offering alongside New Year’s Eve. My mentioning this here is, to quote Sherlock Holmes himself, “of course a trifle, but there is nothing so important as trifles” — especially when one represents product placement at its most blatant.

1. The end-credit outtakes include a gag in which a doctor (Carla Gugino) reaches between the pregnant Biel’s legs and produces two DVDs for Marshall’s Valentine’s Day — a delivery that’s no more stillborn than the DOA New Year’s Eve.