Enjoy the moment, Chairman Cogdell, there won't be many more 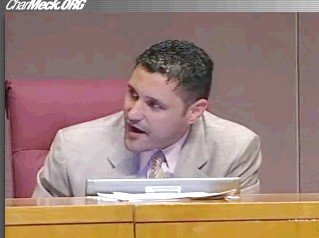 So Harold Cogdell is now the chair of the Mecklenburg County Board of Commissioners, having connived with Republican board members to remove former chair, and fellow Democrat, Jennifer Roberts from her position. I, and many other political observers, have yet to figure out how Cogdell thinks his new position will benefit him.

The GOP’s official story is that Cogdell’s views on cutting property taxes and reining in expenses are more in line with theirs, so naturally they were happy to help him perpetuate his little coup. Democrats are livid over Cogdell’s blatantly self-serving power move, and can be counted on to gum up the works whenever something comes up that could benefit Mr. Chairman.

If Cogdell thinks his new title will position him better to benefit from the Democratic National Convention next year — which is most observers' current favorite explanation — he is dangerously delusional. The Democrats aren’t likely to ever forget his alliance with the GOP this week, and he’ll be lucky to get much, if any, support, financial or otherwise, from them for any future political races. Of course, if he switches parties, it could get him the financial backing he would need to run, but let’s be real, after this last sleazy move, who will vote for him?

One explanation for Cogdell’s move that’s going around is that he has a problem with women and didn’t want to serve on a board run by one. Roberts intimated as much yesterday after the bloodletting had occurred, saying that she wasn’t the first woman to be pushed aside by a man and wouldn’t be the last.

Whatever the reason pinging around in Cogdell’s head, one thing is certain: it will be easier for the GOP to get its issues on the agenda; with the Dems treating him like the plague, Cogdell will be looking for any allies at all to support his own ideas. The Republicans may be wondering, however, how trustworthy an ally Cogdell will be, considering that he initiated the five-person back-stabbing of a fellow Democrat.

As we wrote here recently, one bad thing about ambition is that although it can get you where you want to go, it can also make you foolish and cheap. That’s what happened last evening.