Another cursed Werewolf in town 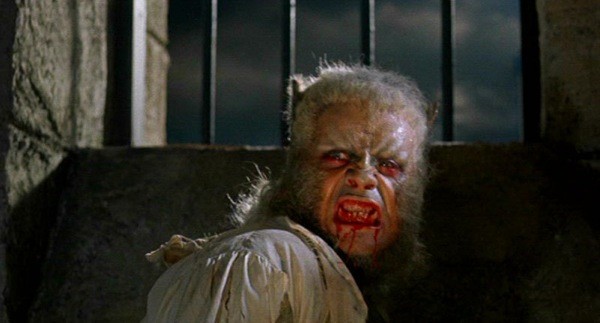 During its heyday, Hammer Films produced nine Dracula pictures, seven Frankenstein films, four Mummy movies and even a couple of dinosaur yarns. But when it came to one of the mainstays of the monster-movie genre, the wolfman, the prolific company managed only to release one title in this vein. Given the solid return on The Curse of the Werewolf, though, it would have been desirable to see them tackle the topic a few more times.

Based on Guy Endore’s novel The Werewolf of Paris but moving the action to Spain, this starts out with a harmless beggar (Richard Wordsworth) being tossed into prison by the heinous Marques Siniestro (Anthony Dawson, best known as the would-be assassin in Hitchcock’s Dial M for Murder); soon forgotten, the peasant spends decades locked up in the dungeon, cared for only by a mute servant girl (Yvonne Romain). When the Marques throws the girl into the same cell for refusing his advances, the now-crazed beggar rapes her; eventually freed, she finds herself in the care of a kind gentleman (Clifford Evans) and his housekeeper (Hira Talfrey), who both help her through her unexpected pregnancy. The resultant child, named Leon (played as a youngster by Justin Walters), eventually finds himself turning into a wereboy, but that evil impulse is finally controlled by the love and support bestowed upon him by his adopted family. Yet once he grows into a man (Oliver Reed) and leaves the nest, he has trouble keeping the beast at bay.

The Curse of the Werewolf barely resembles its source material — for one thing, the rapist in the book is a priest rather than a peasant — but the script by "John Elder" (in actuality the film’s producer, Anthony Hinds) nevertheless manages to be a literate and respectful addition to the lycanthrope canon, generating enormous sympathy for its characters (particularly Romain’s servant girl and Reed’s tortured Leon) and even taking digs at the abuses heaped upon the working class by the 1%: In addition to the Marques Siniestro plotline, there’s also a thread involving Leon’s wooing of the daughter (Catherine Feller) of his employer (Ewen Solon), who would rather see his offspring unhappily married into a wealthy family than finding true love with a commoner. Showcasing the achievements of two Hammer regulars — director Terence Fisher and makeup artist Roy Ashton — The Curse of the Werewolf has never developed the cult following of many other wolfman flicks, but it’s one worth catching.