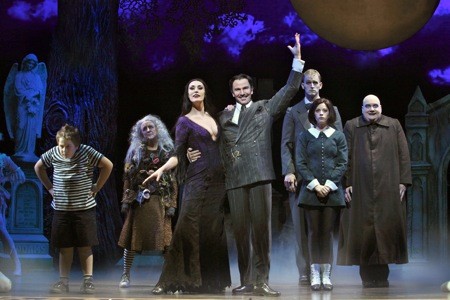 Nathan Lane and Douglas Sills are two very different performers. Polar opposites, you might say. Sills, whom I saw on Broadway in his starring role as The Scarlet Pimpernel, is ruggedly handsome and charismatic, a radiance of light and exuberant energy. The pudgy and cuddlesome Lane seems to draw his surroundings inward toward himself like a magnet — whether he’s portraying a president or a rascally Broadway producer — with a combination of regal confidence, perpetual mischief, and infallible timing.

So with Lane starring at the Lunt-Fontaine Theatre as Gomez Addams, and Sills taking on the role this week at Ovens Auditorium, the touring version of The Addams Family is very different from the Broadway original. Lane sported a slicked-back Dick Tracy look that meshed well with the comic-strip concept. I disagreed with critics who complained that Lane disappeared into his makeup and costume, but I could see where they were coming from — namely The Producers and David Mamet’s November. Wavy hair parted in the middle, Sills is startlingly Chaplinesque, a far more sympathetic and human Gomez.

A big part of this difference dovetails with changes in the songlist by Andrew Lippa and a radical makeover of the book by Marshall Brickman and Andrew Lippa. Gomez is now “Trapped” between love of his luscious wife Morticia and love of his daughter Wednesday, who aspires toward — horrors! — normality in a marriage to Lucas. Wednesday gets Gomez to promise not to divulge the couple’s engagement so that the first meeting between the Addamses and the Beineke family will go well. Trouble is, as Morticia tells Lucas’s mom in “Secrets,” Gomez has never lied to her before, so he’s endangering their marriage even as she sings.

Both of these titles are songs that Lane and co-star Bebe Neuwirth never sang on Broadway. With this new edge of conflict between the headliners, the revamped Act 1 goes very nicely, though I sorely miss the twisted “Where Did We Go Wrong?” duet that Gomez and Morticia sang, lamenting Wednesday’s betrayal of the Addamses’ family values. None of this dramatizing and texturizing disturbs the basic You Can’t Take It With You flavor of the plot, celebrating weirdness and eccentricity as American birthrights — even when they veer into ghoulish morbidity. But after Uncle Fester takes flight, aglow with puppy love in “The Moon and Me,” an improbable man-satellite romance made possible by the wizardry of master puppeteer Basil Twist, eccentricity lapses into nearly total eclipse.

Brickman and Elice’s biggest blunder was axing the Broadway showstopper of Act 2, “In the Arms (of a Squid),” surely the most outrageous epiphany/power ballad of the new millennium. Until he sang this song, I had to wonder why a star of Terrence Mann’s magnitude was being wasted on the role of humdrum Ohioan Mal Beineke. That transformation, after Mal’s sexual encounter with a giant squid, unleashed Mann’s previously moribund charisma. But in line with director Jerry Zaks’s new vision of the show, the writers shit-canned a signature scene, as if the 11-o’clock moment of The Addams Family had been mistakenly assigned to a minor character. Gentlemen: Mal is the stuffed-shirt father whose disapproval is the primary obstacle between Wednesday and Lucas. He’s the main reason why Gomez is in such hot water with Morticia. He’s the antagonist, for crissake.

With the supersized calamari removed from our menus, the bickerings and reconciliations of Act 2 risk plunging into 50’s sitcom blandness — despite the Twist puppetry, despite the Angelina Avallone make-up design, and despite the costumes and sets by original directors Julian Crouch and Phelim McDermott, including the most talented curtain in the history of American musical comedy. Lifting all this visual splendor beyond moribund window-dressing are the Latin flavors that Lippa infuses into his score, most notably “Tango de Amor,” and the knife-sharp choreography of Sergio Trujillo.

Sills and Sara Gettelfinger are more lithe, less marmoreal, in their execution of the climactic tango. Perhaps to compensate for the enhanced warm-bloodedness of the Addamses, Zaks seems to ask his leads to freeze in their takes more often before delivering their zingers — until the last row at Ovens, up in Iredell County, knows it’s coming. For a beat or two, this brilliant device turns the stage into a vast New Yorker cartoon panel, reclaiming a valuable nugget from all the authenticity that has been sacrificed in successive translations of Charles Addams’ ink-and-paper inspirations into TV series, film, and Broadway glitz.

All of the supporting players, with the exception of Martin Vidnovic in the demoted Mal role, are every bit as good as the folk Sue and I beheld on Broadway. Blake Hammond as Fester is our sometime narrator, embodying the Jackie Coogan strain of the character that Kevin Chamberlin brought to Broadway. Courtney Wolfson as Wednesday and Tom Corbeil as the butler Lurch actually left me with stronger impressions than my previous sojourn at the Addams mansion.

Judging by the buzz, subscribers were pleasantly surprised by how good this show is. I thought the Broadway version was underrated, and Addams 2.0 hasn’t changed my mind.