Yesterday, Rep. Sue Myrick — wife, mother, and former adulteress who knows something about making life-choice mistakes — voted for, and helped the House GOP pass, an extremely restrictive national anti-abortion law. The so-called Protect Life Act would prohibit women from purchasing health insurance plans that cover abortion under the Affordable Care Act, the new health care reform law. Republican leaders say the bill would ensure that no tax money goes toward paying for abortions, and that no health worker would have to take part in abortions against her or his will.
Here’s what’s really stupid about the bill, besides being a deliberate attempt to slash women’s reproductive rights: the Affordable Care Act already keeps public dollars apart from private insurance payments that cover abortion.
What’s even more insidious is that the Protect Life Act tries to control how a woman spends her own money. The bill would also severely limit women’s insurance plan choices, since most health insurance plans currently cover abortion.
Let’s take a short break here, so we can remind readers — as we do nearly every time some new restrictive abortion law pops up — that abortion is legal in the United States. It's hard to remember that sometimes, what with social conservatives fighting tooth and nail to restrict access to a legal medical option.
The part of the Protect Life bill garnering the most attention is one that would allow hospitals that are opposed to abortion — Catholic hospitals, for instance — to sit on their hands and do nothing to help a woman who needs an emergency abortion in order to save her life. No wonder, then, that Rep. Nancy Pelosi referred to the Protect Life Act as a “savage” bill that amounts to an “assault on women’s health” — or that pro-choice lawmakers are calling the bill the Let Women Die Act.
Myrick, of course, has been full-tilt into Religious far-right territory for years, and so her vote, although newsworthy, isn't exactly a surprise. In fact, over the years Myrick has seemingly deepened her commitment to the right’s goal of smacking around anyone who dares disobey its moral directives. Maybe her experience breaking up her current husband’s first marriage produced enough guilt to send her over the edge — I don’t know, I’m just saying — but it’s obvious that Myrick has no empathy for any woman who may be in a bind for having done no more than Myrick did years ago. By the way, other Charlotte-area House members, Mel Watt and Larry Kissell, both Democrats, voted against the measure. 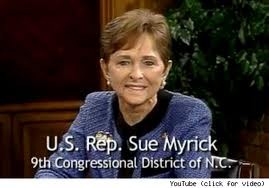