The CNN jabberer and former prosecutor has become one of the most repulsive individuals ever to host a television program, but that wasn’t enough for her. It turns out she had yet another trick up her, um, sleeve — and no, it had nothing to do with her nostrils that look like vents on the side of a submarine. The nation’s Revenge Harpy temporarily gave up her lurid focus on slimy personal crimes in order to compete on Dancing with The Stars, where last night, her right breast practically flew out of her dress.

The mind boggles even as the stomach turns.

After some strategic post-dance readjustment, Grace still had one nipple halfway out, staring right at viewers. Millions saw it. In fact, here’s a picture, in case you happened to miss the Grace-less One’s performance. 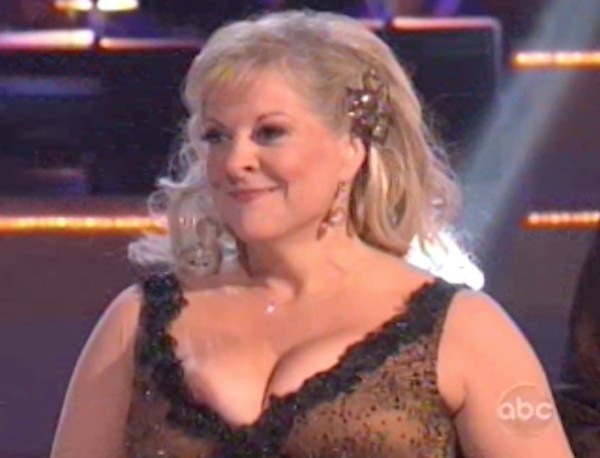 Today, the Queen of Sneer denies it ever happened, evidence be damned — kind of the opposite of her Casey Anthony trial TV shtick where she swore up and down that Ms. Anthony was a murderer, lack of evidence be damned.

In her typical bulldog manner, Grace told CBS News, “There was a little bit of movement but it did not rise to a wardrobe malfunction." She also told reporters that it wasn’t a nipple peeking out of her dress and winking at America — it was a pasty. "When I got dressed, I was wearing Petals (nipple covers) and an industrial strength bra,” she told CBS.

That may be, Nancy, but I’m sorry, no. That’s not a nipple cover. It’s the real thing, also known to some as an areola, a dug, a dumpling, a squish rivet, toggle, monocle, knot, knob, coin, cog, or pacifier. According to Grace, however, "I have been judged guilty without a trial ... I will go to my grave denying the nip slip.”

As always, a class act.