Captain America worth a cheer

Even moviegoers suffering from superhero burnout might want to stand up and salute Captain America, which doesn't match the excellence of X-Men: First-Class but ranks ahead of fellow summer stablemates Thor and Green Lantern.

I've long held a soft spot for 1991's The Rocketeer and 2004's Hidalgo, two box office underachievers that refreshingly stripped away the modern era's automatic coat of cynicism and instead delivered old-fashioned thrills with no trace of irony or condescension. Both films were helmed by Joe Johnston, and coming off the disastrous monster muddle The Wolfman, he's thankfully back in his gee-whiz element here. Captain America has a purity about its politics (not hard when the villains are Nazis) and everything is presented in strictly black and white — or, if you prefer, red, white and blue — terms, resulting in solid matinee fodder.

Chris Evans, in his second tour of duty for Marvel (having essayed the part of the Human Torch in two chintzy Fantastic Four flicks), stars as Steve Rogers, a scrawny kid whose 4F status repeatedly prevents him from being accepted into the army during World War II. But responding to the youth's inner decency rather than his outward lack of muscles, a kindly scientist (Stanley Tucci) decides that he would make the perfect test subject for a serum expected to create the ultimate super-soldier. The experiment is a success — the sickly Steve Rogers now sports a Charles Atlas physique — but only after being mainly relegated to appearing in a colorful costume to drum up support for war bonds is he able to go after the man who has emerged as his arch-nemesis: Johann Schmidt (Hugo Weaving), a vicious Nazi whose use of the same serum has transformed him into the appropriately named Red Skull. 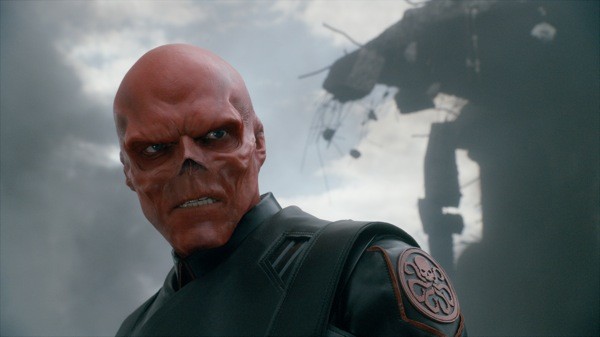 As expected, the movie has the requisite CGI bombast, though the most unique visual effect involved digitally altering the buff Evans so that he would appear emaciated in the early sequences — an approach that works far better than the technique for which The Curious Case of Benjamin Button managed to grab a Best Visual Effects Oscar. Aside from the effects, the movie generally takes a decidedly more low-key approach in its look, heavy on earthy tones and even making Cap's garb less flamboyant than in the comic book. This sense of playing it close to the nostalgic vest even applies to the performances, with Evans sweetly sincere, co-star Hayley Atwell as brassy and buxom as any 1940s actress, and even Weaving delivering the majority of his lines in a low rumble (by comparison, imagine the aural assault if, say, Al Pacino had been cast as the Red Skull). Balanced enough to offer entertainment to young and old alike, Captain America should make us all proud to be moviegoers.