Here’s an item that combines three of my favorite things to write about: the Tea Party movement, my lovely home state of South Carolina, and low-rent crooks. It seems that the president of the Grand Strand Tea Party at the S.C. beach, Anthony Trinca, 61, and his son Michael, 23, were arrested yesterday for allegedly selling pirated versions of Photoshop, the Rosetta Stone language programs, and various kinds of Microsoft software. WMBF News in Greenville, S.C., reports that police say the political pirating pair personally copied the software at Anthony Trinca’s home in Myrtle Beach and sold the stolen materials through Craigslist. They were each released on a $5,000 bond.

To cut to the chase, here’s the kind of idiots we’re dealing with here: the Grand Strand Tea Party website goes ballistic over a supposed terrible, secret government plot to "integrate" the U.S., Mexico and Canada into one humongous country — a favorite far-right paranoid fantasy that dates to the 1990s and the NAFTA treaty, and has been disproved and discredited about three zillion times. TalkingPointsMemo also mentions that part of the Grand Strand Tea Party site “still clings to birtherism (because clearly, Trinca knows a little something about fakes) by claiming that President Obama's ‘Birth Certificate Faked so bad it had to be done on purpose!’" And what do you wanna bet that this sad-ass pair see their actions as “rebellious” and “freedom-loving”? 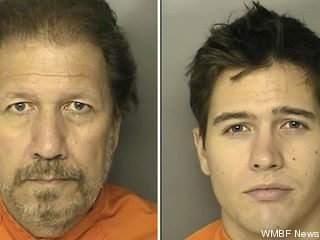