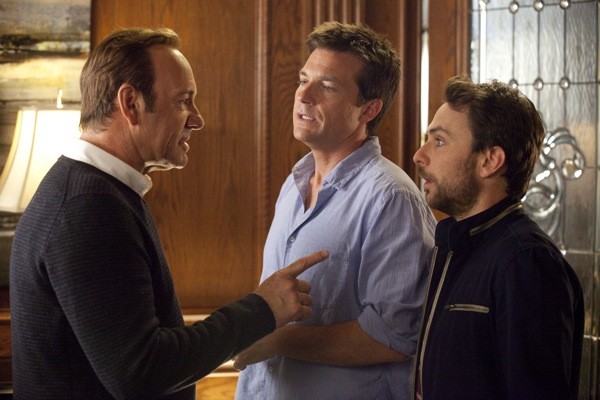 Two-thirds of a funny movie, Horrible Bosses takes its irresistible premise an admirable distance before pulling a Wrong Way Corrigan and heading in an alternate direction, away from true comic inspiration and toward convention and compromise. Still, there are plenty of laughs to be mined, and in the genre of ribald male-bonding flicks, it won't cause a hangover like The Hangover Part II.

Even folks living in caves have seen the omnipresent trailer, which cleanly explains the situation: Three regular joes (Jason Bateman, Charlie Day and Jason Sudeikis) are sick of the abuse heaped on them by their evil employers (respectively, Kevin Spacey, Jennifer Aniston and Colin Farrell) and decide to murder them. They hire an ex-con named Motherfucker Jones (Jamie Foxx) to do their dirty work, but he informs them that he'll only serve as a consultant and that they'll have to do the actual killing. His suggestion: Emulate Alfred Hitchcock's Strangers on a Train (or, as one character amusingly notes, Danny DeVito's Throw Momma from the Train) by having each fellow bump off another's boss, thereby reducing the risk of getting caught.

Despite a few clunkers, the jokes are generally tight, and the five actors, especially Spacey and Farrell, are perfect for their roles; only Aniston's slutty dentist fails to convince, less a fault of the actress than the three screenwriters who don't know how to write this character so that she makes sense. At any rate, the film works up until the point when the bosses are linked up (no fair revealing how), but instead of using this sequence to expand with the intricate plotting, the writers reveal their limitations by allowing the picture to collapse like a house of cards, serving up a perfunctory final half-hour that's no match for the bright hour that preceded it. Horrible Bosses easily earns a commendation, but a bit of overtime on the part of its creative team might have resulted in higher praise.