Nancy Grace gets away with murder

Other than the killing of Osama bin Laden, the not guilty verdict in the Casey Anthony murder trial was one of the few instances of justice being served we’ve seen so far this year. If you’re a trial-follower, before you blow a gasket, consider a simple, oddly overlooked fact: the prosecution couldn’t even prove that a murder had ever taken place, for crying out loud. The state’s “case” was entirely built from a stack of speculations; in other words, the supposed events that Anthony was accused of were no more based on concrete facts — or as some of us call it, reality — than were the abstract “bundled derivatives” bought by the gamblers who nearly brought down the economy in 2008.

The real killer in this case, to me, is CNN’s Nancy Grace, the former prosecutor who has become one of the most truly repulsive individuals to ever host a television program. Maybe in a just world, Ms. Anthony would be found guilty of being a horrid parent, though nothing more than that was even close to proven at her murder trial. But in that same just world, Nancy Grace would be imprisoned for the deliberate, relentless type of character assassination she has turned into a lucrative career. Her indescribably lurid, salivating focus on crucifying Ms. Anthony had all the appeal of watching a pitbull foam at the mouth as it disembowels a cocker spaniel. But you know who’s even worse? The higher-ups at CNN who keep this Revenge Harpy on the air. Please – e-mail CNN and demand that they take Grace off the air. And you know who’s even worse than the CNN higher-ups? People like the modern day lynch mob outside the courthouse yesterday, whose primitive wails of vengeance denied probably sounded just like the collective moan coming from a crowd at a Jim Crow-era lynching when a hanging rope would break. Sorry, but the whole thing is almost too sickening for words. 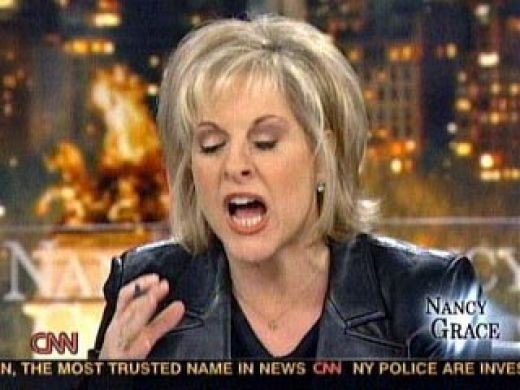