Once again, Rev. Flip Benham is found guilty of stalking abortion doctors — and once again, he gets probation.

In November 2010, our buddy Flip was convicted of stalking N.C. doctors who perform abortions by distributing “Wanted” posters with names and photos of those doctors; he got 24 months probation. Last Friday, Benham was specifically convicted of stalking a Charlotte doctor by the same method; he got 18 months probation, during which time he must stay at least 500 feet away from doctors’ homes and abortion clinics. Our reaction, as it was in November, is: “That’s it?!”  We are, remember, dealing with a guy whose group tries to terrorize doctors in order to keep them from performing a completely legal medical procedure.

Benham has been in the Charlotte area for a few years as leader of Operation Save America, a conservative Christian extremist group, or as some delicately describe them, wacked-out, Bible-thumping, right-wing nutcases. They lovelovelove to share their obsessions with homosexuality and abortion, so they picket gay events, claiming to represent a Christian majority viewpoint, while regular folks ride by and make fun of them. An odd way to spend your spare time, but hey, they have that right. But picketing and “counseling” (otherwise known as “screaming”) is one thing, while passing out fliers that implicitly urge violence against someone deserves a stronger whack than the justice system has yet delivered. The problem here, of course, is that abortion doctors have been attacked, and even murdered, by anti-abortion zealots, and for Benham to then go around fanning those same flames is dangerous, reckless and irresponsible. 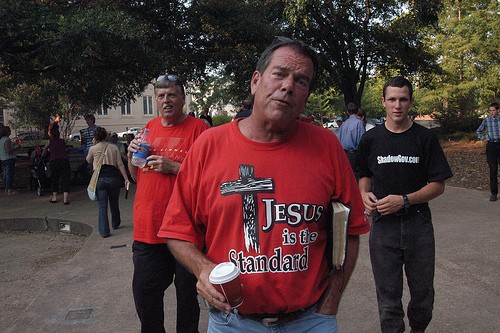