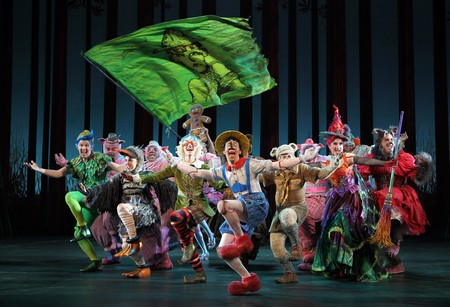 Tap dancing rats, the Three Blind Mice singing backup, and Pinocchio sight gags – welcome to the world of Shrek the Musical, a slightly different place from the green ogre’s 2001 animated film debut. Transporting the Dreamworks flick to the Broadway stage while slapping on an additional 45 minutes in transit, heavyweights Jeanine Tesori (music) and David Lindsay-Abaire (book and lyrics) have most notably brought the fairytale characters into the spotlight.

Their intrusion upon Shrek’s swampy solitude still ignites the ogre’s heroic quest. But now the motley collection, cast out of the kingdom of Duloc by the evil Lord Farquaad, can bewail their miserably-ever-after fate in song, branch out for cameos, develop backbone (or firmed-up splinters in the case of Pinoke), and stand up for themselves. Displaced fairytale refugees buttress the central message of Shrek, not to be ashamed of being different and taking pride in your own special individuality. True to Broadway tradition, they turn the cartoon’s adorable little moral into a mighty ghetto anthem late in Act 2, stoking the flames of revolution in “Freak Flag” and merrily lampooning Les Miz along the way.

Some of the upsizing doesn’t work quite as well. Time spent with Shrek’s callous parents fortifying the ogre’s back story was amusing enough, but the trek through his destined sweetheart Princess Fiona’s travails in captivity proved a little tedious. More annoying was the impulse from the sound booth to pump up the volume – on Shrek, on the fairytale folk, and especially on Madame Dragon, who guards the tower where the princess is imprisoned – at a conspicuous cost to intelligibility.

Largely compromised by the decibel onslaught were the impressive stagecraft of the massive puppet dragon wielded by four puppeteers and whatever take-off on Dreamgirls Carrie Compere may have been delivering with her high-voltage vocal. The unnaturally loud volume was better spent on “I Think I Got You Beat,” the bickering-bonding duet between Fiona and Shrek, liberally punctuated by assorted farting and burping noises from the lovebirds. Although I can’t see the slightest resemblance between him and Tim Duncan, Eric Petersen makes a fine Shrek as he gradually tenderizes, and Haven Burton as Princess Fiona admirably straddles regal grace and earthy grossness. Over the past 10 years, I’d fortunately forgotten how the film ends, so I found the chemistry between Petersen and Burton rather touching in the denouement. 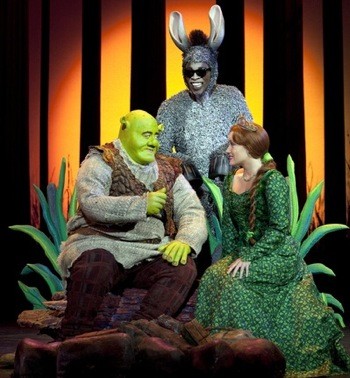 Of course, Shrek was also a buddy film, so it’s great to have Alan Mingo, Jr., aboard as the comical sidekick, Donkey, delivered with equal parts Eddie Murphy and Little Richard. Amid the longueurs of Act 1, where most of the blemishes of this adaptation seem to congregate, Mingo’s desperately importunate “Don’t Let Me Go” is a welcome oasis – and one hilarious donkey serenade.

The costume wizardry that enabled David F.M. Vaughn to become a midget Lord Farquaad was rather winsome and clever, but the Josh Prince choreography outlasted its novelty, and all the scenic devices layered onto the Duloc production numbers dispelled the loathsome Farquaad magic instead of sustaining it.

I didn’t expect Shrek to equal the best that Tesori (Thoroughly Modern Millie and Violet) and Lindsay-Abaire (Wonder of the World and Rabbit Hole) have created in the past. But judging by the opening night turnout and response, Shrek delivers handsomely on the fun-filled family night it promises. You won’t see the Gingerbread Man captured and tortured so delectably anywhere else – and you must get a load of the Shrek hoodies at the concession stand.