Today is the 30th anniversary of the shooting of Pope John Paul II in St. Peter’s Square in Rome. He recovered, of course, and remained Pope for another 24 years until his death in 2005, at which point the new Pope, Benedict XVI, started planning to make JPII a saint. Benedict beatified John Paul — the last step before sainthood — two weeks ago.

I come from a deeply old-school, European “incense, rosaries and miracles” Catholic background. These days, however, I’m a pretty disgruntled Catholic — not really “lapsed,” but not happy about the church hierarchy either — who has a thought or two about the rush to declare JPII a saint. Briefly, I’m against it, for several reasons. Here are some of those reasons:

• JPII started out as a breath of fresh air — at 58, younger than most new Popes,  physically energetic, and a welcome force against totalitarianism. But he also turned out to be a rigid defender of a repressive form of conservative Catholicism and a strong ally of powerful established elements in the Church that would love to overturn the “window-opening” changes wrought by Popes John XXIII and Paul VI during Vatican  II.

• He loved traveling and smiling all over the world, but his thinking on critical Catholic issues — priests’ celibacy, ordination of women, contraception, divorce, etc. — was shallow and deeply disappointing to Catholics who expected JPII to expand the necessary, modern changes of Vatican II.

• He was extraordinarily harsh with theological dissenters, primarily Jesuits, who wanted the Church to do more to help the poor, particularly in Latin America. Instead, he strongly supported serial pedophile Rev. Marcial Maciel Degollado, the founder of the Legion of Christ, in order to bolster conservative orthodoxy in that region. Along with the group Opus Dei, the Legion of Christ became JPII’s pitbulls against the Jesuits and other Church liberals.

• The primary reason, however, that John Paul II should not have been beatified, much less granted sainthood, is his abysmal — truly abysmal — role in the pedophile/sexual-abuse crisis. The New York Times’ Maureen Dowd, in an excellent recent column titled “Hold the Halo,” reports on the many times JPII was told by bishops and cardinals that the sexual-abuse crisis was epidemic and needed strong action on his part. Dowd concludes, “And he was passive to an absolute fault. He failed in mountainous terms.”

Now, neither Maureen Dowd’s griping, nor mine, nor that of Catholic progressives will stop Benedict XVI from making JPII a saint. He also wants to do the same for Pope Pius XII who notably remained silent about the Third Reich’s horrific persecution of Jews, gypsies and gays. Meanwhile, as Dowd and columnist E.J. Dionne point out, neither Pope John XXIII, who launched the Vatican II reforms and was beatified 11 years ago, nor social justice advocate and Catholic Worker movement founder Dorothy Day, who has been “considered” for beatification since 1997, are in Vatican limbo. 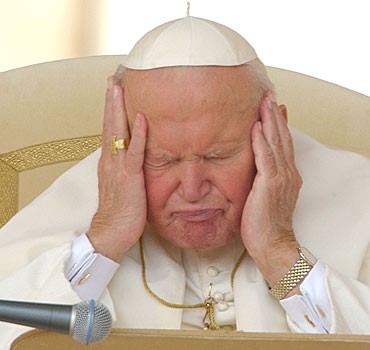