‘Spillionaires’: Profiteering and mismanagement in the wake of the BP oil spill 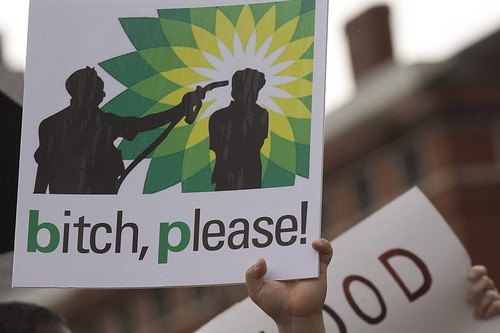 From our friends at ProPublica:

The oil spill that was once expected to bring economic ruin to the Gulf Coast appears to have delivered something entirely different: a gusher of money.

Some people profiteered from the spill by charging BP outrageous rates for cleanup. Others profited from BP claims money, handed out in arbitrary ways. So many people cashed in that they earned nicknames -- "spillionaires" or "BP rich." Meanwhile, others hurt by the spill ended up getting comparatively little.

In the end, BP's attempt to make things right -- spending more than $16 billion so far, mostly on claims of damage and cleanup -- created new divisions and even new wrongs. Because the federal government ceded control over spill cleanup spending to BP, it's impossible to know for certain what that money accomplished, or what exactly was done.

Some inequities arose from the chaos that followed the April 20 spill. But in at least one corner of Louisiana, the dramatic differences can be traced in part to local powerbrokers. To show how the money flowed, ProPublica interviewed people who worked on the spill and examined records, including some reported earlier by the New Orleans Times-Picayune, for St. Bernard Parish, a coastal community about five miles southeast of downtown New Orleans.

Documents show that local companies with ties to insiders garnered lucrative cleanup contracts and then charged BP for every imaginable expense. The prime cleanup company, which had a history of bad debts and no oil-spill experience, submitted bills with little documentation or none at all. A subcontractor charged BP $15,400 per month to rent a generator that usually cost $1,500 a month. A company owned in part by the St. Bernard Parish sheriff charged more than $1 million a month for land it had been renting for less than $1,700 a month.

"This parish raped BP," said Wayne Landry, the chairman of the St. Bernard Parish Council, referring to the conduct of its political leadership. "At the end of the day, it really just frustrates me. I'm an elected official. I have guilt by association."