Like many people, I have relatives who forward chain e-mails. Thanks to a couple of cousins I really like but rarely see, I can keep up with a slew of cool nature videos, “you won’t believe this” photographs and goofy games, along with the occasional FoxNews-ish political rants. Yesterday I received one of the "Foxy" e-mails, which has been making the Internet rounds for some time. Trouble is, it’s completely false, and I thought you might want to know, in case you’ve either seen the message or it pops up in your in-box. The e-mail claims that “Obama has directed the US Postal Service to REMEMBER and HONOR the EID MUSLIM  holiday season with a new commemorative 44-Cent  First Class Holiday Postage Stamp.”  The message goes on, in enormous letters, to remind recipients to tell postal clerks that they don’t want "Muslim stamps," and to “pass this along to every Patriotic American you know and get the word out!   Honor the United States of America!”  Here is the supposed Obama Muslim stamp, sent with the e-mail. 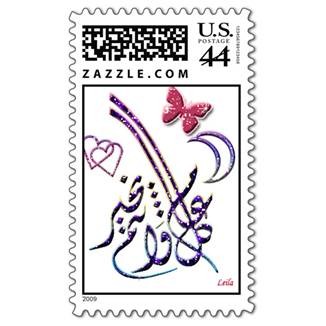 The truth, ironically enough, is that not only does Obama have nothing to do with the stamp, it was George W. Bush’s administration that began issuing stamps to honor two Muslim holidays, about a month before 9/11. According to the nonpartisan factcheck.org, the stamp was reissued on Oct. 10, 2002. Factcheck.org continues:

At that time, the Bush White House posted an item promoting the special stamp, as part of an effort to reach out to the world Muslim community on Ramadan. Bush himself marked Eid al-Fitr with an address at the Islamic Center of Washington, D.C., Dec. 5, 2002.

Bush issued statements of personal greetings to Muslims in connection with the Eid al-Fitr holiday not only in 2002, but again in 2003, 2005, 2006, 2007 and his final year in office, 2008. (In 2004 we couldn’t find a Bush message honoring Eid al-Fitr, but Bush did follow his usual practice of honoring Ramadan that year, even as he was campaigning for reelection.)

There’s another bit of irony here, if you want to call it that. The stamp above wasn’t issued by the USPS, but by Zazzle.com, which sells custom-made products, including postage stamps. Here is the actual EID stamp from USPS: 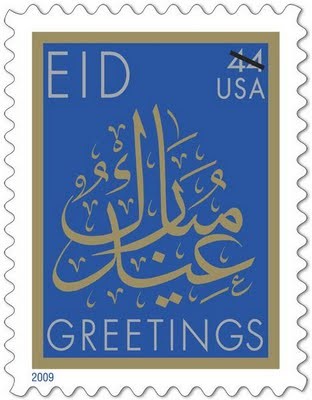 And here’s a message that today’s rabid anti-Muslim crowd may be interested in. It’s from former Pres. G.W. Bush, who when he addressed the D.C. Islamic Center, a mere 15 months after 9/11, said, “The spirit behind this holiday is a reminder that Islam brings hope and comfort to more than a billion people worldwide. Islam affirms God’s justice and insists on man’s moral responsibility. This holiday is also an occasion to remember that Islam gave birth to a rich civilization of learning that has benefited mankind.”  Just thought you'd like to know.