Just Go With It: Better yet, don't 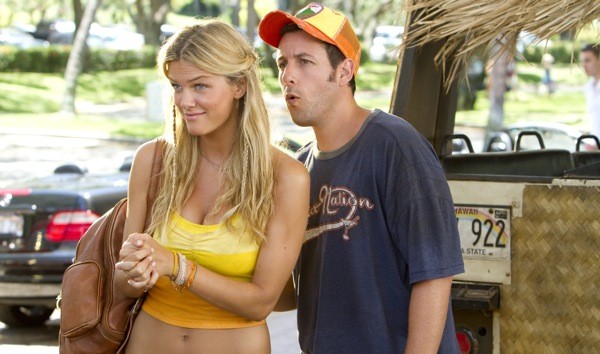 JUST GO WITH IT

Adam Sandler's latest catnip for knuckleheads, Just Go With It, is based on Cactus Flower, a farce that's been the basis for a French play, a Broadway hit, and a motion picture starring Walter Matthau, Ingrid Bergman and Goldie Hawn in her Oscar-winning role. But here's the thing: Not until I actually saw the words "Cactus" and "Flower" during the end credits did I even realize this was supposed to be another adaptation of that middling comedy. Upon reflection, it certainly contains similar ingredients to the 1969 film I caught on VHS years ago, but they've been buried under so much narrative rubble that my cluelessness was understandable.

It's a shame, because the base story — the usual formula about a man (in this case, Sandler's plastic surgeon) who spends all his time chasing the wrong woman (Brooklyn Decker's school teacher) before realizing that the Right One (Jennifer Aniston's office assistant) was by his side all along — is workable, there are a few genuine chuckles (certainly more than in the atrocious Grown Ups, which contained, uh, maybe one), and — shocker! — the child actors (Bailee Madison and Griffin Gluck) have more personality than the usual plastic moppets dragged out for these types of films.

But any potential is negated by bad casting choices — not Charlotte-raised bombshell Decker, who fulfills the minimal demands of her role, but screen irritant Nick Swardson, a useless Dave Matthews and a slumming Nicole Kidman — and the typical Sandler-Dugan concessions to fratboy humor. Whether it's a kid pooping on Swardson's hand or Sandler describing his own poop as "black pickles," these witless interludes destroy the film's raison d'être: its romcom convictions. After all, it's hard to snuggle with your sweetie in the auditorium when both hands are required to cover your nose and mouth.