Blogger Will Folks on alleged Haley affair: 'Nikki climbed on top of me, rubbing her crotch back and forth'

Last campaign season's story about an alleged  “inappropriate physical relationship” between now-Gov. Nikki Haley of South Carolina and conservative political blogger Will Folks is exploding again today. Folks has released excerpts from an upcoming book, which he nicknames his “tome of love,” which detail an encounter that allegedly took place in Haley's SUV. Keep in mind that Haley has vehemently denied that the relationship ever took place, and has, in fact, promised to resign if any of Folks’ claims proved to be valid. Folks’ account is pretty salacious, and God knows what effect it may or may not have on Haley’s new administration. Here’s an excerpt below; you can read more of Folks’ literary efforts at his blog.

We never took our clothes off that first night, but the physical relationship between us progressed much faster than I expected. After sliding the front seats of her SUV as far back as they would go, Nikki climbed on top of me - rubbing her crotch back and forth over the growing bulge in my pants while I groped her ass and ran my hands through her hair and up and down her back.

John Mayer’s “Slow Dancing In a Burning Room” played on her CD changer.

Nikki and I kissed even harder and heavier than we had before (away from the lights of the Vista, we weren’t worried about people seeing us here), and at one point I slid my hands under her turtleneck and felt her breasts over the black bra she was wearing.

It was intense. In fact it was one of the most passionate “eighth-grade make out sessions” I’ve ever experienced in my life. Immediately, it was apparent to both Nikki and I that the sexual chemistry between the two of us was very strong.

Nikki told me that night that she had never been unfaithful to her husband – and that up until that evening she had never so much as kissed another man before.

As a book reviewer, I have to say I like the touch of mentioning the John Mayer song playing in the background. As a political writer, though, I have no idea who to believe in this mess, but it's news, so there you have it. 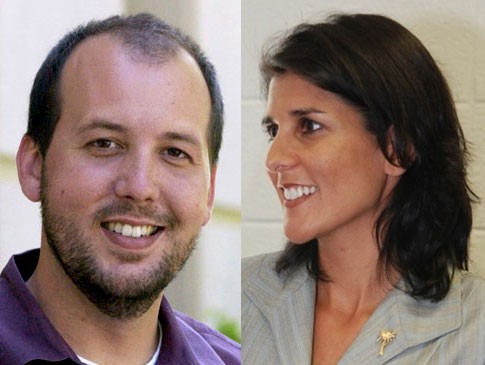