Rep. Michele Bachmann (R-Minn.), the Tea Partyin’ congresswoman who is prepping for a run at the presidency, said the other day that she is opposed to the Transportation Security Administration's full-body scanners because she’s worried that “naked pictures” of herself could end up on the Internet for the world to behold. Bachmann, who has also been in the news recently for giving the Tea Party rebuttal to Obama’s State of the Union address while staring into space, told an audience at an Iowa coffee shop that she refuses to go through the scanners — which we assume means she prefers the TSA’s infamous “security groping” to creating her own onscreen “mature porn.” Those are the kinds of tough choices a future president has to make, I guess.

Unfortunately for Bachmann, she may be too late. According to one of our favorite alternative weeklies, City Pages in Minneapolis, which often engages in shameless satire, the paper “was contacted by a member of the TSA, who said he had something we might be interested in.” When a reporter met the man, says City Pages, he “opened a manila folder containing grainy photos . . .from an airport body scan. ‘That’s her,’ he said. Having heard that naked pictures of Brett Favre's penis fetched thousands, the man initially tried to negotiate a similar high price for his naked Bachmann photos. In the end, however, he settled for $20 and a half-finished Subway punch card.”

Below, we present the City Pages exclusive photos for your, um, edification. 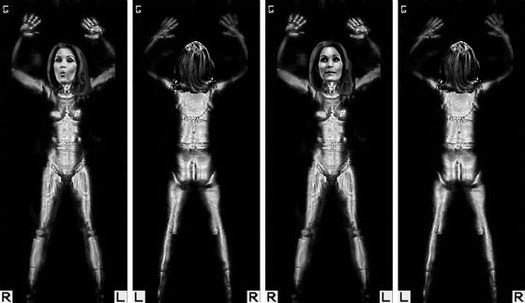