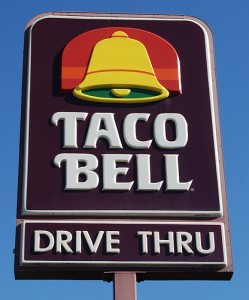 Did you hear? Taco Bell is being sued by a Montgomery, Ala., law firm that wants to know what's in the company's meat. Here's a snip from Yahoo! News:

"Rather than beef, these food items are actually made with a substance known as 'taco meat filling,' " the lawsuit says. The firm contends that that Taco Bell shouldn't market the taco meat filling in question as beef because their testing shows that it only contains 36 percent ground beef. If that's true, Taco Bell's meat filling product would fall below the already generous USDA standard for it to qualify as meat -- the present standard demands it consist of at least 40 percent meat. This inspired Gizmodo's Jesus Diaz to crack, "Perhaps they should call it 'Almost Taco Meat Filling.'"

It appears that Taco Bell is interested in having a debate over the meaning of the word "beef." The fast food chain, victim of a class-action lawsuit claiming that its taco beef is only 35 percent actual beef, has released a new ad directed at its accusers (as well as its customers, presumably) saying, "Thank you for suing us."

The fact is, Taco Bell is in the unenviable position of defending against accusations that its food is not really food. In the end, I would argue that the damage has been done.

Read the rest of this post, by Tom Laskawy, here.

I'm going to have to go with Tom here. The fact that the company stands accused of using a food substance that's two-thirds filler and only one-third beef is enough to make me lose all interest in eating at the restaurant chain. What about you?

Of course, couldn't we see this coming? As the saying goes, we get what we pay for. Problem is, in this economy, for some people food-like substances will have to do, and this is one restaurant where five bucks will fill an empty stomach.

Rhiannon "Rhi" Bowman is an independent journalist who contributes commentary on Creative Loafing's CLog blog four days a week in addition to writing for several other local media organizations. To learn more, click the links or follow Rhi on Twitter.