We’ve been saying this for years, and we’re not giving up now, particularly on Martin Luther King Jr. Day. Here’s the problem: Charlotte needs to find a replacement for the statue of (supposedly) MLK Jr. in Marshall Park.

The sculpture, which looks as if some arbitrary guy is holding his hand out to check for rain, was created in the 1980s by then-80-year-old Selma Burke, originally of Mooresville and ostensibly the creator of the Roosevelt image featured on the dime. The MLK statue, and I am being very kind here, sort of, kind of looks like Martin Luther King . . . but not really — although, strangely enough, it’s a dead ringer for a guy I knew in my hometown named Hazel Willis. Seriously.

The Marshall Park statue once inspired an unsuccessful effort to replace the head of the full-body sculpture, which, on top of its other distinctions, was named “World’s Worst Martin Luther King Statue” in a book by Jerry Bledsoe, North Carolina Curiosities.

On MLK Day, this is the perfect time for local government to spring for a better statue. It’s simple, really: If you honor someone with a statue, at least make sure it looks like the guy. 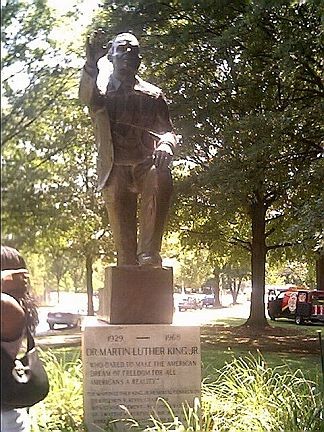