Tangled has its roots in old-school Disney 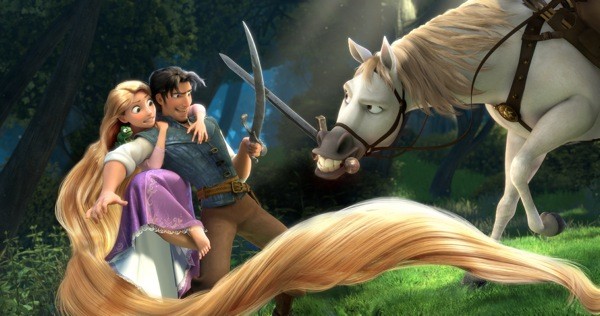 Pixar came into power circa the same time that Disney lost its hold on the toon crown, and while the former animation giant may never reclaim its title, its acquisition of John Lasseter's trendsetting outfit suggests that it at least might be able to ascend from its status as court jester to a more regal standing (Disney Princess?).

Tangled follows last year's The Princess and the Frog (both executive-produced by Lasseter) as an indication that, after years of dreary product (Chicken Little, anyone?), old-school Disney might be making a comeback. Yes, the animation is CGI rather than hand-drawn, but both Frog and Tangled benefit from strong storylines that stir memories of the outfit in its distant prime. In the case of this latest picture, it's a loose retelling of the tried-and-true saga of Rapunzel, she of the loooong golden hair. Forced by an evil woman she believes to be her mother (and who looks like 80s-era Cher) to stay hidden in a tower 24/7, Rapunzel (voiced by Mandy Moore) reluctantly complies until the day a devil-may-care thief named Flynn Rider (Zachary Levi) happens to come along.

This one's no classic-in-the-making, but it's certain to remain one of the season's best bets for family entertainment, with a pleasing mix of music, mirth and oddball supporting characters. Even the kid-oriented comic relief, Rapunzel's right-hand chameleon, is likely to charm the adults, further designating Tangled as silky-smooth entertainment.