Supreme Court Justice Clarence Thomas’ wife, Ginni Thomas, wants Anita Hill to apologize, nearly 20 years after Hill delivered her electrifying testimony of being sexually harassed by Thomas. Hill, a Brandeis University professor, says she has nothing to apologize for, and we agree. Ginni Thomas has a ton of nerve, considering how many women came forward to confirm Hill’s description of Clarence Thomas as a serial harasser with a fixation on hardcore pornography and telling jokes about pubic hairs on Coke cans.  Today’s piece by Washington Post columnist Ruth Marcus was appropriately titled “It's not Ginni Thomas who deserves an apology.”

Justice Thomas has spent the past 19 years in a rage, denying the sexual harassment charges and fuming over the Senate hearings, which he called “a high-tech lynching.” Thomas’ “lynching” metaphor didn’t hold up, though, since, A. he had every chance to refute the testimony presented against him, and B. being confirmed to the U.S. Supreme Court is hardly the same as being lynched, no matter how paranoid you may be.

Ginni Thomas has obviously bought her husband’s guilt-denial story, and although one hesitates to criticize someone for defending her spouse, the multiple cases, and piles of evidence, regarding Thomas’ lecherous comments and odd suggestions during his younger days  are, to put it mildly, very convincing.

If anyone still doubts Hill’s contentions about Thomas, they should ask Charlotte resident Angela Wright, a former Thomas employee, and subsequently a reporter for the Charlotte Observer and a county government PR flack. Wright told Senate investigators at the time of the hearings that Thomas pressured her for dates, showed up unannounced and uninvited at her apartment (obsessive-compulsive, anyone?), and often made comments about her breasts and legs. At one point, Wright told the Senate investigators, "Clarence Thomas would say to me, 'You know you need to be dating me ... You're one of the finest women I have on my staff."

Wright, though, did not testify before the full committee. Stories vary on why she wasn’t called, but the general consensus was that the Democrats were getting so much pressure from the  Bush administration over Hill’s testimony, they caved in (there’s a surprise) and dropped the idea of having more women testify to Thomas’ behavior.

So if any apologies are due here, it’s Clarence Thomas who needs to be delivering them. Except for one more apology we'd love to see: The Democratic members of the Senate Judiciary Committee in 1991 (including now-VP Biden) need to apologize to the American people for dropping the ball and letting Thomas slide through to the nation’s highest court, where he is widely regarded as one of the most clueless justices in the Court’s history. Maybe he’s distracted, trying to find pubic hairs on everyone else’s Cokes. 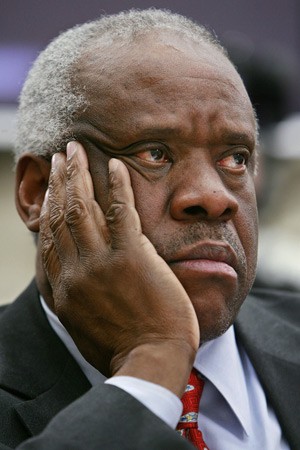