Jackasses have free speech rights, too

Do followers of nutcase preacher Fred Phelps have a constitutional right to picket the funerals of American soldiers? That’s what the Supreme Court is trying to decide, after an appeals court overturned a $5 million jury verdict against Phelps and his church, Westboro Baptist, for “intentional infliction of emotional distress” and “invasion of privacy.”

Phelps and his crew are some of the most twisted people I’ve ever heard of, and the anger and anguish of Albert Snyder, the deceased Marine’s father who sued Phelps, is completely understandable. The Westboro crew show up at U.S. soldiers’ funerals with outrageous signs that read “God Hates the USA,” “God Hates Fags,” “God Hates Your Tears,” “Thank God For Dead Soldiers,” “Thank God for IED’s” [roadside bombs], “Thank God for 9/11,” and the mystifying “Pope In Hell.” Phelps and crew, in effect, celebrate the deaths of U.S. soldiers, saying their loss of life is God’s way of punishing America for tolerating homosexuality. They’re a sickening bunch, in other words, and I admit that whenever I’ve seen them on the news, the thought has crossed my mind that it would be great if a few soldiers leaped into the picture and, ohh, say, gave them a piece of their mind.

However, as a TV show host once said, “Everybody has a big ‘but,’” and the big but in this case is that yes, Phelps & Co. are repugnant, but so are the Nazi Party and the Ku Klux Klan, and courts have ruled over and over that those groups have a constitutional right to demonstrate publicly. So, it follows, do the funeral protesters, no matter how low we think they’ve sunk.  The 1st Amendment doesn’t guarantee free speech only for the respectable and conventional; it protects (or is supposed to) the free expression of ideas and opinions, even if, as in the current case, the vast majority of Americans would find those ideas stomach-turning.

The Marine’s father’s case is hampered by the fact that he didn’t see any of the signs at the funeral itself, because the Westboro demonstrators, obeying a judge’s order, were about 1,000 feet away. At the same time, it’s hard not to feel for Snyder, whose anguish was palpable when he told an interviewer, “I didn’t think any human being could do the things that they did. They mentally abused and terrorized me at the lowest point of my life.” Snyder is absolutely right that he was abused by people who are, basically, vile examples of the human species. The trouble is that under our Bill of Rights, even vile examples of the human species can express their opinions.

OK, that’s the legal side of the arguments. Down on “real world” level, however, I can’t imagine too many people having a problem with, say, a group of Marines showing up at a couple of Phelps’ protests and, um, showing them a thing or two. I'm just saying ... 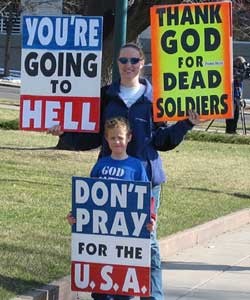