Here’s a big “thank you” to Rep. Mel Watt of Charlotte, who yesterday was one of only two members of the House of Representatives from the Carolinas to oppose additional war funding. Watt, along with the frequently unpredictable Walter Jones (R-NC), voted against providing another $59 billion to keep financing the wars in Iraq and Afghanistan. The House approved the funding by a vote of 308-to-114. Jones was one of only 12 Republicans to vote against the measure, along with 102 Democrats. A similar, mid-year war spending bill in 2009 was opposed by a mere 32 Dems, but opposition to the endless quagmire in  Afghanistan has grown dramatically since then. That opposition can only grow in the wake of recent leaks that confirm the futility of the Afghan fiasco. As the rest of the  Carolinas’ delegations went along with the costly charade — can’t irritate the gung-ho war-lovin’ crowd in the Ca’linas, don’t you know — it’s worth noting that Watt (pictured on top) and Jones refused to play along. Thanks, gentlemen. 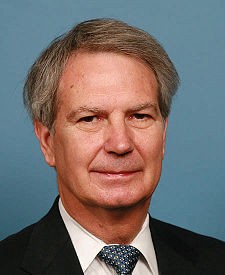