Burr votes against $500 million for N.C.

The state’s and county’s budget woes are about to get even worse, partially thanks to Sen. Richard Burr, although it remains to be seen exactly how much worse the problems will be. If you thought the libraries, schools and parks took major hits under the new county budget, the news out of Washington and Raleigh could make you feel faint.

First, in Washington yesterday, the U.S. Senate rejected a bill to extend unemployment benefits and tax breaks; that bill included $500 million in aid to North Carolina for this year’s budget. Without that money, the state’s budget is essentially in freefall, and the most likely casualties will be the UNC system (which, as was reported last week, is already losing many of its best professors to universities around the country), and programs that help the politically powerless, for instance kids who need health insurance (which has already been trimmed so much this year that new children in need of insurance will soon be turned away). In the U.S. Senate, Sen. Kay Hagan voted for the bill that would have sent $500 million to N.C., while Sen. Richard Burr, who is running for re-election this year, voted against the bill. Thankyewsomutch, kind master.

Now comes more bad news from Raleigh that could further screw things up in Mecklenburg County. A “legislative alert” from the N.C. Association of County Commissioners, passed along via Commissioner Bill James’ e-mail list, claims that budget conferees in Raleigh are considering taking money from the counties’ lottery funds in order to balance the state budget. If the state winds up taking all of Mecklenburg’s lottery funds, it will mean a loss of $16.8 million, which county commissioners would then have to cut from the county budget, or else raise property taxes. Without new taxes, the hardest hit areas would be — you guessed it — public schools, libraries, veterans and parks.

What you can do: call your local legislators in Raleigh and let them know you don’t want the county’s lottery money being used to plug budget holes in Raleigh at the expense of our veterans, libraries, schools and parks. 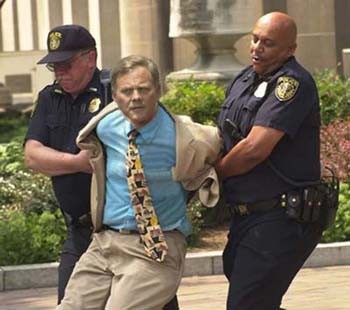