By now you’ve heard of the 6-story statue of Jesus in Ohio that was incinerated Tuesday after being struck by lightning. Now people all over the Internet are wondering if the lightning was a sign from God. The statue, officially called “King of Kings,” but more often named “Touchdown Jesus” because of the position of the statue’s raised arms, has been a classically American oddball roadside attraction since it was built in 2004 by the evangelical Solid Rock Church in Monroe, Ohio, just north of Cincinnati. Some web dwellers are saying TJ’s big flame-out was a sign of impending doom for the world (naturally). One guy said it’s a sign that God is now in favor of cremation, and wanted to let us know in a big way. Others simply regret they'll no longer be able to create goofy photos at the site (such as the three guys, shown below, who elicited TJ’s help to spell out “O-H-I-O”). A slew of people have commented that the fire is a definite sign that the builders were doofuses for constructing TJ of plastic foam and fiber glass over a steel frame, or, as one blogger put it, “a lightning rod coated in flammable material.” I would only add that the builders’ doofus-osity is doubled by the fact that they didn’t even think to ground the thing. I don’t know if TJ’s destruction was a sign, but if it was, I’d like to think that God is saying he’d like for religious statuary be created with a little friggin’ taste next time! The pastor of Solid Rock Church says TJ will be rebuilt; no word on what materials will be used this time.  Enjoy the video. 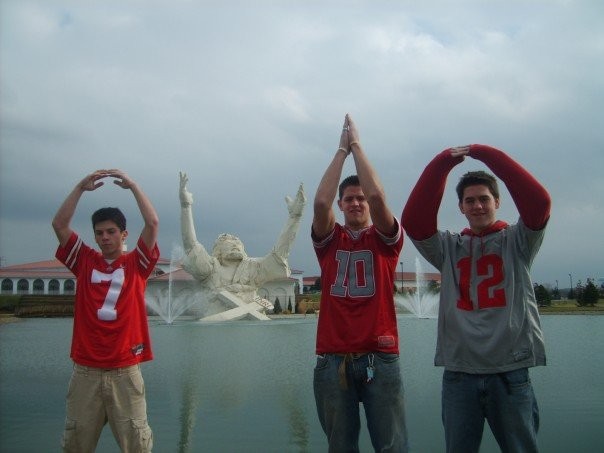