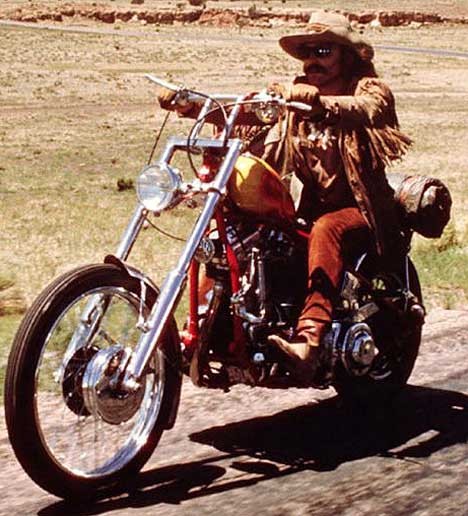 Dennis Hopper is one of the great ones. He's an incredible actor, writer, director and producer. Hopper is iconic in a way that today's stars could never be.

He mastered television and film, refusing to privilege one over the other. Dennis Hopper gives 100% of himself to every role in every medium. He is as compelling as a goon in Rebel Without a Cause as he is as an outcast in his groundbreaking film, Easy Rider. Viewers are able to connect with Hopper because he pours every ounce of himself into his television and film roles. It doesn't matter if he's in a guest slot on Gunsmoke, starring in Paris Trout, part of an ensemble cast like Apocalypse Now, directing a genre-defining film like Colors or helping a hit film like Crash become a hit television series, he gives viewers the best that he's got.

The same man that takes incredible risks in his personal life takes the same type of risks with his career, opening doors that would have previously been shut. He could have easily capitalized on the cult success of Easy Rider, but chose to pursue smaller, more artistic endeavors overseas. The same way that he pursued causes with conviction and laser focus is the same approach that he took to filmmaking. His existence and body of work is central to the Golden Age of independent cinema, ushering in an era of film that questioned the status quo, pushed boundaries and, in my mind, moved the film industry forward. Hopper's personal and professional choices were not always popular, which is probably why he is just getting his star on the Hollywood Walk of Fame. That and the fact that he's terminally ill. Although doctors advised that he was too sick to attend his Walk of Fame ceremony, Hopper was there, a shell of his former physical self, still giving us the best that he's got.

In honor of this great filmmaker and actor, I say turn away from the gossip and turn toward his tremendous body of work. This weekend, next weekend or sometime in the near future, revisit the work of Dennis Hopper so that when the "journalists" attempt to reduce his legacy to a drug-addicted wild man who divorced his wife on his death bed, you'll know some of his truth. What is that truth? Dennis Hopper is one of the greatest of all time.