The General Assembly in Raleigh is losing its second big Democratic powerbroker in as many months. Sen. David Hoyle of Gastonia, a developer and longtime rail-greaser for business interests, announced yesterday that he’s leaving the state legislature after serving nine terms. Hoyle’s decision comes on the heels of Senate Majority Leader Tony Rand’s announcement that he’ll resign by the end of the year. Hoyle was ranked the third most effective senator for the past decade by the N.C. Center for Public Policy Research, right behind Rand and Hoyle’s Raleigh roommate, Senate President Pro Tem Marc Basnight. Media reports of Hoyle’s departure keep mentioning what a terrific, “business-friendly” legislator he’s been, as if propping up business interests is the purpose of government.

Progressives in N.C. have long considered Hoyle a DINO (Democrat in Name Only), and they’re right, considering that Hoyle’s record includes cutting taxes for the rich while increasing the regressive sales tax; routinely handing over taxpayer dollars to any out-of-state company that showed up in Raleigh with its hand out (and in one case, giving “incentive” money to a tire company that didn’t even ask for it); allowing wealthy homeowners on Figure Eight island to “harden” their beaches, in clear violation of state coastal policy; and voting for a Gaston County expressway that would greatly increase the value of 327 acres he and his family owned. In addition, check out Hoyle's unbelievably poor record on environmental issues here.

And, as pointed out by BlueNC, in “this year alone, Hoyle voted against the anti-bullying bull, voted against the Healthy Youth Act, and signed onto the marriage discrimination amendment.” How do you say “good riddance” in Gastonian? 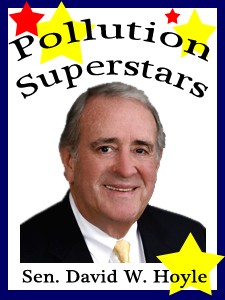