Bloomberg, a 29 year-old graduate of Winthrop University who resides in Charlotte, took the time to speak with Creative Loafing about his colorful, abstract paintings.

Creative Loafing: When did you start painting? 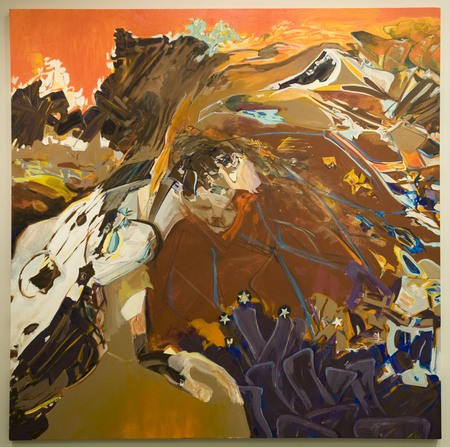 Do you usually come up with titles for the paintings before or after they are finished?

Most of my work is spontaneous. I compare my work to jazz music a lot. I might have a general sense of the painting and a vague image that I start working with, but I feel like painting has to be an investigative process. The end product ends up being a discovery. The statement kind of comes out of the interaction of my thinking, the sort initial product, and where it takes me. So, there’s a quality of a vague set up and elements of improvisation. It’s a way that I can tap into a sense of realism, rather than just depict the world, as it exists.

You mentioned jazz being a source of your inspiration. Do you ever listen to music while you paint?

Yeah, I feel like music is the epitome of art. Music helps me sort of maintain that sense of being and that’s what I want to be able to plug into the work. There are times that I have to work when its quiet, so that my overall presence can take over, but when I can’t find it myself, music can sort of trigger the place that I want to be in to make it work. 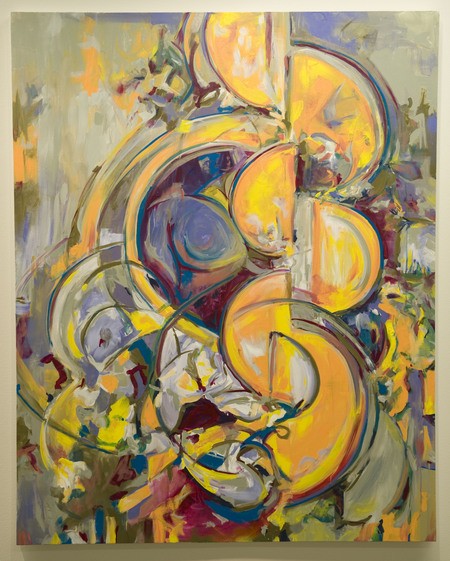 What inspired the painting “Sound Support”?

That’s a nice continuation from what I was just talking about, because that work in particular was the second time I had attempted to paint live onstage with musicians. It was kind of nerve wrecking, but it felt like an evolution from the sort of theory that I was talking about. That painting started out as a blank canvas and it was painted at Snug Harbor. Four bands [Ultimate Optimist, Moenda, King Tut and Tim Morrison Trio] later, I had a finished painting. Rather than documenting the exact image of what was going on that night, it sort of documented the sense and the sounds of the evening. That’s why it was called “Sound Support,” because I actually had the help of other musicians in a live sense, rather than just having a pre-recording with sounds I could tap into.