WTF, Gov. Sanford? Boomer was just joking about Naked Hiking Day. (Not that there's anything wrong with that.) You didn't have to go all the way to Argentina to prove you're not a naturist.

Now, focus. Why did you leave the country and not tell anyone, including your wife and children? You missed Father's Day. (You suck for that one, Sir. Way to set an example.)

We understand it must be tough to be a politician, that it's humiliating when things don't go your way and you're forced to choke down stimulus funding your state desperately needs. Looking past your own ego and wants must be challenging after all these years, especially when you're on the national stage.

But, face it dude, it's time to put your big boy pants on and accept the responsibility you begged the public to give you. You can't just go flitting around the world, disappearing for a week, and think no one's going to notice.

We heard that you're surprised people are so interested in your whereabouts. To that we say:

YOU ARE THE FUCKING GOVERNOR OF A STATE. YOU CAN'T JUST GO RUNNING OFF WITH STATE-OWNED SUVs AND THINK NO ONE WILL NOTICE. WHAT IF SOMETHING HAPPENED TO YOU? WHAT IF THERE WAS A CRISIS? WHO IN THE HELL WAS IN CHARGE?

Now, go sit your lame ass in the corner and think about what you've done. Oh, and kiss the White House good bye. There is no way in hell you'll ever live this drama-queen trip down.

South Carolina Gov. Mark Sanford arrived in the Hartsville-Jackson Atlanta International Airport this morning, having wrapped up a seven-day visit to Buenos Aires, Argentina, he said.

Sanford said he had not been hiking along the Appalachian Trail, as his staff said in a Tuesday statement to the media.

Sanford's whereabouts had been unknown since Thursday, and the mystery fueled speculation about where he had been and who's in charge in his absence. His emergence today ended the mystery.

Sanford, in an exclusive interview with The State Media Company, said he decided at the last minute to go to the South American country to recharge after a difficult legislative session in which he battled with lawmakers over how to spend federal stimulus money. 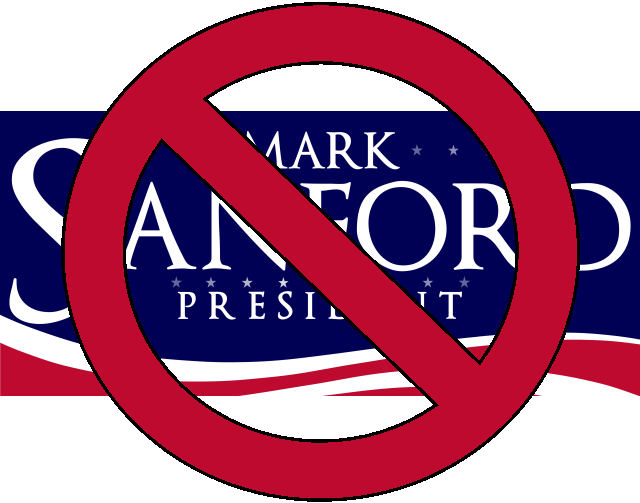