Adults vs. Crybabies in NC House 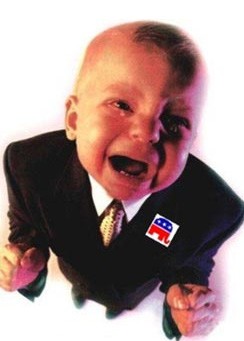 Late yesterday, a crucial committee vote took place in the House in Raleigh that showed some unexpected backbone and, well, adulthood, from state lawmakers. The House Finance Committee approved a mix of new and/or increased sales taxes, higher income tax rates for wealthy taxpayers, and new corporate tax rules.  While the grown-ups in Raleigh, i.e., a chunk of the Democratic Party, were doing the hard work of softening the blow of draconian budget cuts, the usual spate of GOP crybabies stood aside, yelling about taxes and holding their breath until their faces turned blue. With a state economy that was last seen circling the drain, Republican legislators had little to offer other than spouting the usual anti-tax clichés, and generally acting as if leaving things as they are — with an incredible 20 percent of the state budget slated for cutting — isn't a one-way street to statewide chaos and misery. How the GOP reps can honestly see their approach as an even marginally responsible way to run a state is frankly beyond me. Our state taxes aren't that high to begin with, no matter what the right claims, and if it means ponying up to keep helping those in desperate need, or not letting our roads crumble, then count me in for a tax hike.