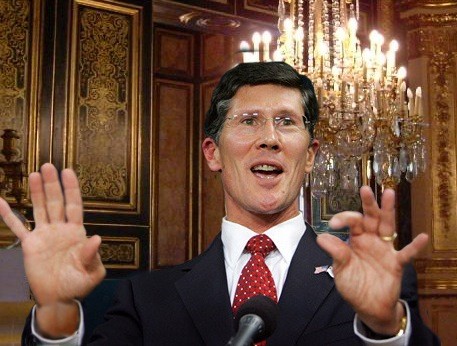 Former Merrill Lynch CEO "Champagne" John Thain — he of the $1.2 million-office decoration and the now-infamous $1400 Wastebasket — says his old buddy Ken Lewis is a liar.

The accusations couldn't come at a worse time for the Bank of America CEO, who faces the threat of losing his job at this week's highly anticipated shareholder meetings.

The new brouhaha between the former pals goes back to the payment of $3.62 billion in bonuses by Thain to what he called his "best people" in December 2008 (these "best people," by the way, had led Merrill Lynch to financial ruin). The bonuses were moved up to December '08 rather than January '09, and Ken Lewis has inferred that BofA knew nothing about the bonuses, nor their timing. Thain now tells the Wall Street Journal that he and Lewis agreed in writing that the bonuses could be paid before BofA's acquisition of Merrill Lynch closed. Thain told the WSJ, "The suggestion Bank of America was not heavily involved in this process, and that I alone made these decisions, is simply not true."

This latest accusation about Lewis' truth-stretching comes on the heels of his testimony to the New York Attorney General, in which Lewis said he was pressured by the Federal Reserve during the Merrill Lynch acquisition talks to not disclose Merrill Lynch's $15.45 billion fourth-quarter losses. Officials at the Fed dispute Lewis' version of events, and deny that anyone told Lewis to withhold public disclosures. The issues of the Merrill Lynch acquisition and the ML bonuses are expected to be major points of contention during this week's BofA shareholder meetings.