The Boy in the Striped Pajamas: Innocence lost 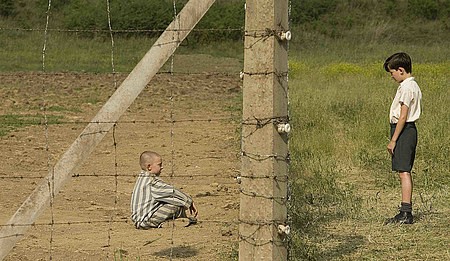 THE BOY IN THE STRIPED PAJAMAS

Movies about the brutality of the Holocaust seem to automatically earn R ratings, yet The Boy in the Striped Pajamas, perhaps because it's based on a novel (by John Boyne) that was originally targeted to teen readers, escapes with a PG-13. That's the appropriate rating, I think, since children who can handle (and learn from) the material should not be denied the opportunity to see it.

The film is fairly original in that it's told from the viewpoint of a young German lad who unwittingly has a front-row seat to the horrors instigated by the Nazi regime during World War II. Eight-year-old Bruno (Asa Butterfield, just perfect) is saddened when his father, a Nazi officer (David Thewlis), moves the family from Berlin to a remote country estate. Once there, Dad's always busy with his job, Bruno's sister (Amber Beattie) is obsessed with her posters and photos of Adolf Hitler and his minions, and his mother (Vera Farmiga) does little more than deflect his questions about the farm across the field, a mysterious place where all the prisoners wear pajamas and billowing smoke from the chimneys constantly blackens the sky. Bored and lonely, Bruno eventually defies his parents' orders and checks out the farm, where he strikes up a friendship with Shmuel (Jack Scanlon), a Jewish boy residing on the other side of the barbed wire.

Credibility takes a serious beating over the course of this picture, which is clearly intended as a fable about how hatred can destroy even the most innocent among us. Bruno's naiveté provides the picture with its initial childlike charm, yet the movie is complicated enough to explore the conflicting emotions among the adult characters (Bruno's grandmother, for instance, has nothing but contempt for Hitler's efforts). But even in its lighter moments, the picture never downplays the horror of the situation, and the devastating ending is potent enough to affect even those viewers who write it off as nothing more than a sensationalist stunt.