Is there anyone out there who isn't aware of the Internet phenomenon known as the "Chuck Norris Facts"?

In a nutshell, the "facts" are nuggets of wisdom concerning the martial arts champion and former Walker, Texas Ranger star. In all cases, they're fabricated statements made to illustrate Norris' toughness and take-no-prisoners demeanor. Reportedly, Norris himself is a fan of these "facts," and why not? Not only do they bulk up his reputation as the ultimate bad-ass, but they're also funny. Very, very funny. 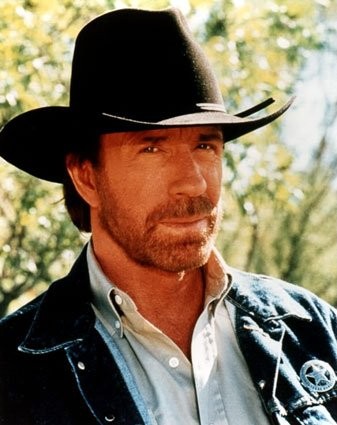 You can find over 100 such "facts" on numerous Web sites, including here and here. Here's a sampling of 10 choice quips.

2. In fine print on the last page of the Guinness Book of World Records, it notes that all world records are held by Chuck Norris, and those listed in the book are simply the closest anyone else has ever gotten.

3. Chuck Norris is what Willis was talkin' about.

4. Chuck Norris is the reason Waldo is hiding.

5. Those aren't credits that roll after Walker, Texas Ranger. It is actually a list of fatalities that occurred during the making of the episode.

6. Whoever said "only the good die young" was probably in Chuck Norris's kindergarten class.

7. They were going to release a Chuck Norris edition of Clue, but the answer always turns out to be "Chuck Norris. In The Library. With a Roundhouse Kick."

9. Chuck Norris once went skydiving, but promised never to do it again. One Grand Canyon is enough.