Art in a cart: Mobile Art Studio for Creative Disruption

Since New Englander Diana Arvanites arrived here in 2007, she and the South have been an uneasy match, so it was a surprise when she decided to debut her Mobile Art Studio for Creative Disruption (MASCD) in the middle of a brutal Southern summer.

Starting on June 17, Arvanites has been wheeling her shopping cart/workspace through the metro area, bringing art to people in a way that is direct and disarming. The cart is stocked with supplies and has multiple work surfaces, so several people can draw or paint at the same time, resulting in an intimate art-making experience. So far, MASCD has visited Freedom Park, Villa Heights and Kerr Street in Concord, as well as NoDa, were Arvanites set up shop on the same night Green Rice, one of the neighborhood’s last galleries, was closing. 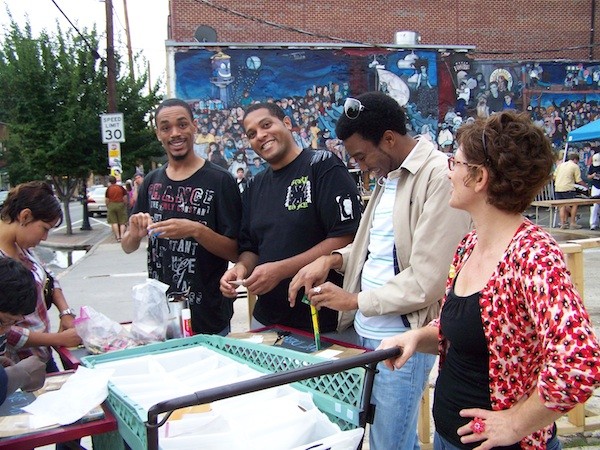 In her role as a citizen artist, Arvanites seeks to make art accessible without dumbing it down or making it sappy. In devising MASCD, she was inspired by the influential artist Joseph Beuys and his promotion of the idea of "social sculpture" — that is, a work of art that can potentially transform society. She built MASCD in collaboration with her partner, Marc Leclair, whom she describes as “an engineer, gadgeteer and electronics geek.”

MASCD is intentionally uncertain and spontaneous — “on an anti-schedule,” Arvanites says. She decides on a destination perhaps a few days in advance, and because the settings vary widely no two experiences are ever the same.

While MASCD is by design impromptu, there might be some long-term planning in Arvanites’ future. She would like to do residencies in other parts of the country for the purpose of building and deploying more carts and is also considering converting a motor vehicle into a studio.

For all of the philosophical and political intent behind the Mobile Art Studio for Creative Disruption, there is a pleasing simplicity to it. “I can’t believe how happy this project makes people,” says Arvanities. “People just don't get enough art.”