Last chance to enter The Darkroom

Twenty-Two has become one of the more interesting spots in Plaza Midwood over the past couple of years. The bar/gallery continues to show some of the most exciting local art and its current photography exhibition is no exception.

Six Charlotte based photographers are displaying their work against Twenty-Two's newly painted black walls, and the timing couldn’t be better for the establishment’s updated look. It also gives more poignancy to the exhibit’s title, The Darkroom, though perhaps that’s merely a coincidence.

Dylan Chorneau, Richie McCorkle, Micah McSwain, Kenny Owens, Myk Pate, and Kevin Womack all have distinctive styles, yet The Darkroom feels anything but scattershot or incoherent. It is held together in part by the common thread of featuring local people and places, many of which come not only from Charlotte but from the Plaza Midwood neighborhood itself.

Kenny Owens comes from the film world but it’s clear that he’s having no trouble translating his eye to still photography. Many of his pictures contain motion and a cinematic, scene-like feel that make them appear as if they’re movie stills. His work bares a slight resemblance to Ryan McGinley and Brandon Herman’s work, though he admitted to not having heard of either and cited fashion photographer Terry Richardson as his main non-filmmaker influence.

Myk Pate’s contributions have a more glossy and flashy feel. His works appear as if they have been ripped from the pages of entertainment magazines. They grab your attention and made me think that this is what Larry Clark’s work might look like if he were a bigger fan of color and the more exuberant side of debauchery.

Micah McSwain and Richie McCorkle take a street photography approach. McSwain’s work most often centers around the detritus found on the street itself. The black and white photos present rust, decay and various debris in intimate close ups that allow the viewer to look at these usually unloved items as something worthy of careful and loving inspection.

McCorkle is showing work dating as far back as ’96, and extending to this year. His work focuses on street scenes; mostly skaters pulling off tricks or just hanging out. Fittingly, he is donating a portion of the proceeds from the sale of his work to the “Let The Good Times Roll” skate park project.

Dylan Chorneau’s black-and-white portraits are among the most calm and focused compositions in the show. Shadow and obscurity play a big role in many of the pieces. Even when we can see the subjects’ faces they remain expressionless, giving nothing away. 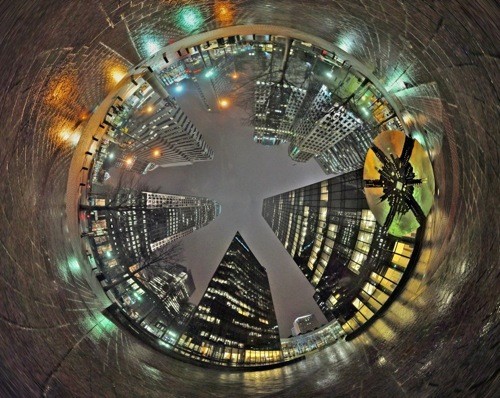 Finally, Kevin Womack presents unique pieces which left me lingering and scratching my head, curious as to how he’s managed to create these surreal images. There are a couple straightforward pictures, and one tilt-shift photo, but the ones that are most accomplished and noteworthy are his stereographs. Womack explained to CLT Blog that he shoots multiple overlapped photographs by hand, usually about 10 to 45 for each individual stereograph, and then stitches them all together. He then morphs and stretches the stitched panoramic until he arrives at the desired final image. The result is wholly unusual and technically impressive. It’s the city and surrounding neighborhoods as seen through a distorting vortex. Womack has informally dubbed this series "Planet Charlotte," and for me they were the highlight of an already impressive show.

The Darkroom will be on display through March 26 at Twenty-Two (1500 Central Avenue).